I was invited to take part in Scottish Friendly’s Payday Mayday challenge this January. Scottish Friendly is a British financial services group. Their mantra is to make investments more accessible to everyone.

January is a bit of a nightmare month generally, as most of us get paid just before Christmas, spend a good chunk of our salaries on Christmas (and the sales!), before having to survive January on a meagre pittance. It’s small wonder that apparently 44% of of people make a New Year’s resolution to spend less then.

We were challenged with reducing our discretionary spending by 25% (that’s after the mortgage, which is our biggest outgoing and not something we can change as it’s about as cheap as we can go, and other fixed costs!) and although that’s something that sounds daunting, we were up for the challenge.

There’s a bit in Terry Pratchett’s Mort where the titular character has to clean out the stables (it’s a parody of one of the 12 Labours of Hercules, but you probably guessed that), and Mort uses a tried and tested system to break down the task into smaller bits:

“After a while he got into the rhythm of it, and started playing the privet little quantity-surveying game that everyone plays in these circumstances. Let’s see, he thought, I’ve done nearly a quarter, lets call it a third, so when I’ve done that corner by the hay rack it’ll be more than half, call it five-eights, which means three more wheelbarrow loads …. It doesn’t prove anything very much except that the awesome splendour of the universe is much easier to deal with if you think of it as a series of small chunks.”

Rather than baulking at the fact we’ve got to economise by hundreds of pounds, we decided to look at lots of little ways to save a few pounds here and there. So without further ado, here are my top tricks and tips for saving and cutting out that unnecessary spending. 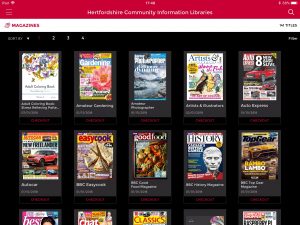 Firstly we took the time to install the Hertfordshire County Library app on our iPads and tablets. Most counties do something like this as part of the library service but they don’t advertise it very well. As you can see the choice of magazines you can borrow is staggering, and given that magazines can cost £5.99 and more each, this has probably saved us over £30 a month on casual magazine purchases. A small step but one that takes us in the right direction.

Secondly, and one that appeals directly to my DIY ethos, we’ve made a pact to ditch all those coffee shop coffees. I got a bean grinder from my parents for Christmas (although if you want to buy one, it’s only the cost of a few Americanos). If you’re addicted to say your Starbucks, you can actually buy the beans in the supermarket (£3.55 for 200g of Starbucks house blend medium Arabica coffee). 50g of beans is enough to make a litre of coffee, so 200g should get you about 4 litres of coffee. A tall coffee is 350ml, and costs £1.95. Your £3.55 of beans can make 11 cups of  “tall” coffee, against the coffee shops price of £21.45. That’s a saving of almost £18 for ever 11 coffees you make at home! If you pick up a coffee every day on the way to work, that’s going to save you about £35 a month per person, and a lot of time queuing!

Encouraged by the fact I can now sip a freshly home-brewed coffee as I walk through the sleet and snow to work, we decided to move on to the other big daily cost, lunch. Neither of us particularly ever made a packed lunch, preferring to grab a meal deal or something that tickles our fancy. That’s £3-£6 each every working day, and that soon adds up over the course of a month- £120-£240 for the pair of us. This is it chaps! The opportunity to save a huge wodge of cash! 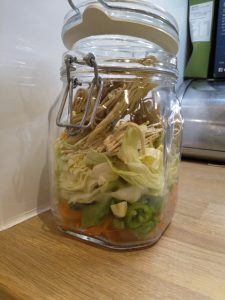 Enter Hugh “Fearlessly Eat It All” Fearnley-Whittingstall. A quick look on the River Cottage website showed his DIY pot noodles. They looked absolutely yummy, and about as dirt cheap as you can get to make. Yes, actual Pot Noodles aren’t expensive but they’re not filling either, these DIY ones can be big enough to constitute an actual meal and leave me deciding on a sandwich for tea. Some sliced carrot, spring onions, cabbage, chilli, ginger and (obviously) noodles are we were good to go. The cost was minimal, especially once we’d twigged stopping off at the market on the way home.

That’s three changes we made and we’re already over £300 a month up (and at best £350), without having to ruin the kids (or our) quality of life either!

The biggy that I wasn’t sure I was ready to make though was losing my gym membership. It’s increasingly difficult to go enough to get value for money as the kids have so many clubs and activities they go to. Even though it was our local authority gym and I get a discount through work, making it less than half the price of some of the premium gyms in the area, it was still £40 a month. I’ve made a promise to myself to do the four mile round trip to work on foot and have installed Couch 2 5K on my phone (as well as Runkeeper) and I’ve got my 9 year old daughter training me. It’s a good bit of father daughter time, even if she has to constantly stop to let me catch up!

So there you go, four changes, almost £400 a month saved. The trick will now be keeping up with it, otherwise I’ll have to cancel my sports TV package to make up the difference, and if anyone ever needed an incentive, that would be it!