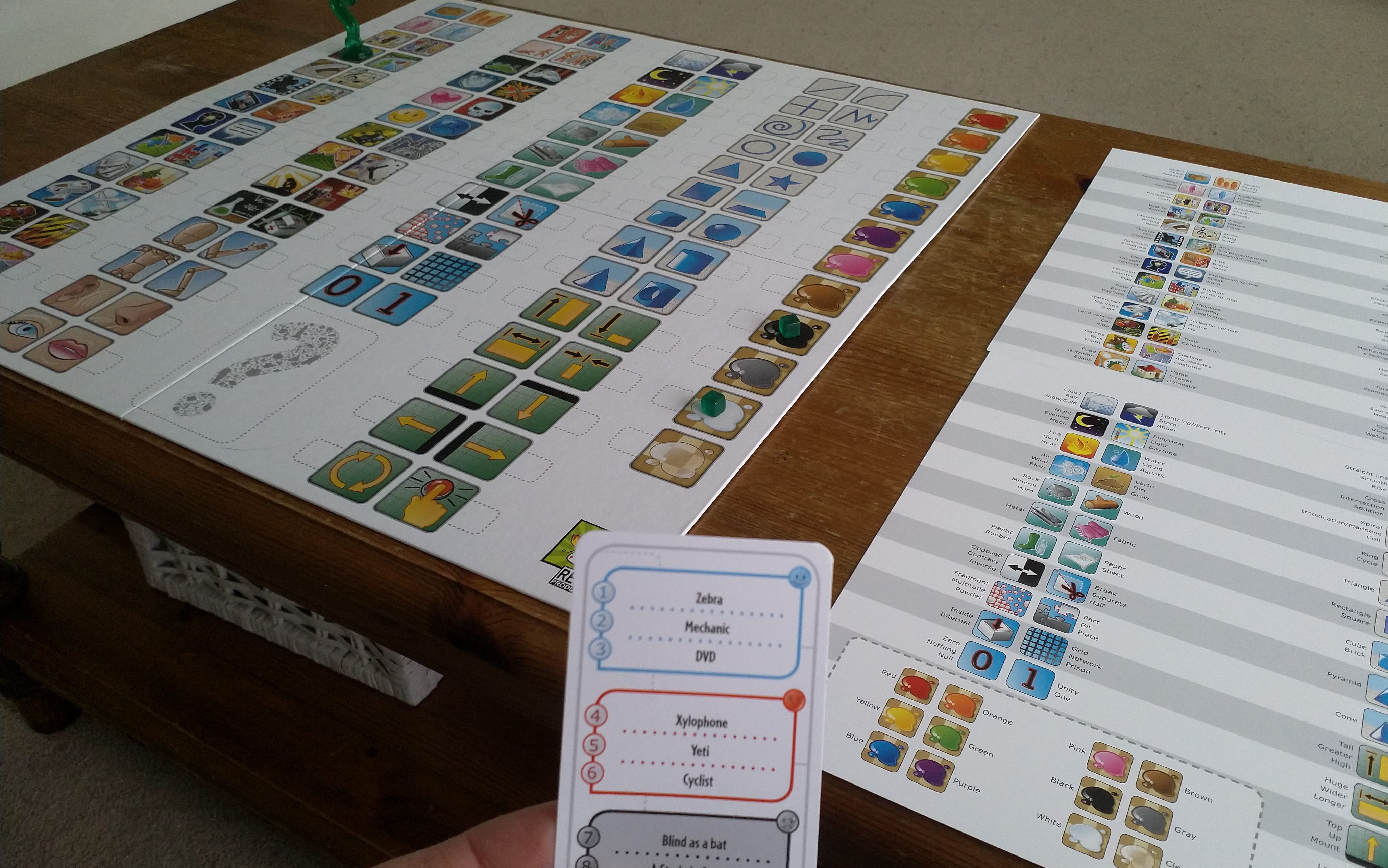 At completely the opposite end of the board game spectrum from last months Catan, is Concept, a board game built around using visual clues to guess a word or phrase. Concept is dead easy to play but like any good board game, the more people you have, the more fun and frantic things get.

Concept is the latest game we’ve been sent by the board game club to expand our board gaming vistas beyond the traditional games of Monopoly and Cluedo that are pretty much all I ever managed to progress to after I got bored playing chess.

Concept has a board with four columns and a row of colours. The idea is to string together a cryptic set of icons from the columns to describe a word or phrase from a card. Each card has three words or phrases on for three different difficulty levels.

In the picture above, for the word “Zebra”, I put the starter piece (a question mark) on the animal icon in the first column, and then two cubes on the black and white colours. This says to the other players on my team that they’re looking for an animal that’s black and white. So far so simple but what if the card had “Jaws” on it? That’s a bit more complicated. I might put the question mark starter on film or TV, then a cube on animals (both of these are in the first column), then a cube on hare in the second column to denote “speed”, and finally a cube on the water icon in the third column to denote it’s an aquatic animal. Hopefully that would be enough for someone to guess the movie as “Jaws” and not Free Willy or The Penguins of Madagascar! 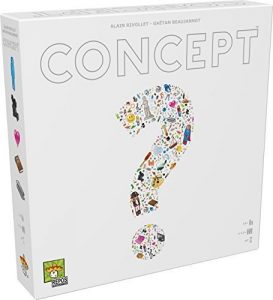 Those are the basic rules but they do get more complex- you can effectively give separate sub-clues by using different coloured cubes, and other players should pay particularly close attention to the order that the cubes are laid down as they can give important clues themselves.

I’ve read some stinking reviews of Concept online from board game enthusiasts and if you google Concept you’ll probably find some yourself but I found myself enjoying the game immensely and finding completely the opposite to these negative reviews. Them great thing about Concept is the limitations to what you can select in terms of icons/clues. You sometimes have to use a large degree of lateral thinking to get to an answer that might seem obvious to you but everyone else is struggling to get to grips with. This creates great tension and allows for a lot of banter during a game (which typically lasts around 40 minutes). The more people you have, the more fun you will have as it can get quite competitive in the way that a slower, more complex game doesn’t.

Concept is aimed at 10+ year olds, and although it’s easy to CRUSH your kids while playing, it is also a genuine learning experience for them as they’re learning all sorts of logic puzzles and semiotics(!) Concept is available from all good retailers for an RRP of £30.99.