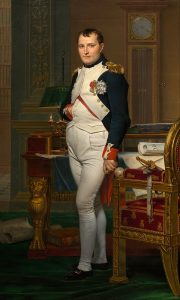 Napoleon and I have one or two things in common. I’m not a short French dictator with a complex but I’m pretty rubbish at a war of attrition, and good old Napoleon did rather famously fail in his invasion of Russia. Facing my big fear- my own mortality, and doing something about it- is in many ways akin to invading Russia. The first bit is easy but then all you see is the enormity of it and feel trouble – but it doesn’t have to be this way if you can just see past the initial panic.

Fortunately I’ve not been driven to eating my own horse. That’s probably because I don’t have a horse mind you.

Feeling galvanised from my first conversation with Becky from the AXA PPP healthcare team, I finally got around to booking my 40+ health check at the doctors. Only three years too late but you know me, never put off until tomorrow what you can put off indefinitely. My fear of being told something was seriously wrong with me (I’m quite a bit overweight) made it much easier to avoid. But now I’m into the swing of facing my fears and using them to motivate myself, I thought it was entirely the right time.

So imagine my surprise when I received a phone call a few days after having my blood tests asking me to come in immediately as I was a high risk of diabetes. I happened to take the call while taking the cat to the vets to have the pus drained from a bite on his head, so couldn’t go in immediately. And the doctors being the doctors, immediately didn’t have the option of not quite immediately but very soon anyway. No, I had a wait of a week which reduced me to a nervous wreck. Fortunately I was able to draw on the expert help of Becky from AXA PPP healthcare, who as well as being a physiologist, also happens to be a pre-diabetes councillor.

Becky was able to talk me down from the cliff I’d put myself on (metaphorically, I’m scared of heights too), and pointed out that one in three people are actually pre-diabetic and there were some really practical steps I could take right away. For me fear is quite strongly rooted in passivity and the inability to effect outcomes, so having something practical to do before I saw the GP really really helped me. Sometimes you need a little help to own your own fears, and AXA PPP healthcare were able to provide that.

The biggest problem I have generally when it comes to achieving any goal is keeping the focus and not either backsliding or losing interest over a period of time. I have a short attention span, and even less sticking power. About the only thing I ever really finish are books, and I’ve lost count of the number of video games I’ve only ever played the tutorial on (hint: it’s most of the video games I’ve ever played).

That’s not to say I’m lazy (although my wife might disagree!) but I don’t easily see things through. For example if you were to ask me how good I thought Breaking Bad was, I’d tell you it was utterly fantastic and one of the best TV shows I’ve seen. I’d then go on to tell you that I got as far as episode six of season two and never got round to watching the rest of it for some reason or other. I am terrible.

This is were Becky at AXA PPP healthcare has really helped. Being held accountable, especially to someone I don’t really know, has helped me stay focused and the scare over being potentially diabetic has also played it’s part too. Knowing that I’m still in the woods as it were, and not free in the open has a certain immediacy to it that is helping.

With regard to the targets we set last month (get down to under 100KG, eat better lunches, and the third one?) I’m slowly getting there. I’ve lost three kilos in total, despite being busier at work and in the office longer. I’ve also enjoyed some great left overs and had some positive comments from others over what I’ve been scoffing. I’ve even managed to cut down the drinking significantly, not that it was excessive to begin with mind, but it all helps doesn’t it?

If you’ve been putting off something like a check up or a well being check, I can heartily recommend you grab the bull by the horns and make that appointment now. The simple fact you’re actually doing something will actually be empowering because the fear of being afraid of what you don’t know can’t be any worse than the fear of what you do know and are dealing with!