Last Sunday was the St Albans Half Marathon. I didn’t run the half marathon. I didn’t run in the 10K either but I did run with my kids in the 1.5 mile fun run, and that ladies and gentlemen is entirely down to AXA PPP healthcare helping me in owning my fear of decrepitude and channelling it into something positive!

Vangelis is blaring out; I’m running in slow motion, aiming for the 4(+6) minute mile and frankly I might as well be Roger Bannister. All five of us ran the fun run but the two older kids went off at blistering pace, and wifey followed to make sure they didn’t get lost in the throng at the end. That left we running with Ned, who is six. Ned is a natural at pretty much everything but his one weakness with running is not pacing himself. Fortunately, running with me he had no choice but to run a bit slower. Even so, we passed a lot of parents, kids, teenagers and sole runners, which was heartening.

I had a plan though, and it wasn’t entirely down to my fitness or Neds aged either. As we came into the home straight, with crowds down both sides of the course, I turned to Ned and said, “Do you think you can sprint as fast as you can to the finish?” and of course he could. He might as well be modelled on Dash from the Incredibles because when he started really running, I had to put everything into it to keep up with him. We must have overtaken 40 or 50 people on that stretch, me crying “Run Forrest Run!”, Ned weaving in and out of people and as we approached the finish line, being cheered on by the crowd, we held hands and crossed the line together! 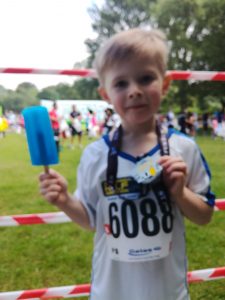 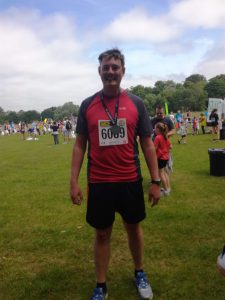 I’ll tell you this, it might have been hard work getting even this far, but it felt damn satisfying to cross the finish line of a 14 minute run at full pelt, holding my six year olds hand.

My fear of dying prematurely and leaving my wife and kids on their own was crushing and it was holding me back in so many ways but I’ve owned it. Now you can too, you can submit your fears here on the AXA Own Your Fears website and start your journey too. Did you know that 60% fear dying early and leaving their children? I wasn’t alone and the chances are you aren’t either.

Just remember, pretending that everything is all right doesn’t make it so, and that anxiety will be sitting there at the back of your mind nagging away at you.

Aside from the culmination of the the fun run, this past month has seen me double down and concentrate on not stuffing up. For me apathy to change and general can’t be bothered-ness has always been a problem but having a target to aim for has helped tremendously.

Talking to Becky, my support from AXA PPP healthcare has given me some great tips for keeping going, focusing on the lifestyle I want to achieve, rather than just specific targets, like losing X kilos, or being able to run 10K. I’m never going to be the sort of bloke who appears in a shaving advert but I could easily be one of the people to appear in a popular lifestyle product advert if I put a bit more work in and that’s what its about in a daft way. It’s much easier to buy into a lifestyle than a set of dry specific targets and that piece of advice has really helped me a lot.