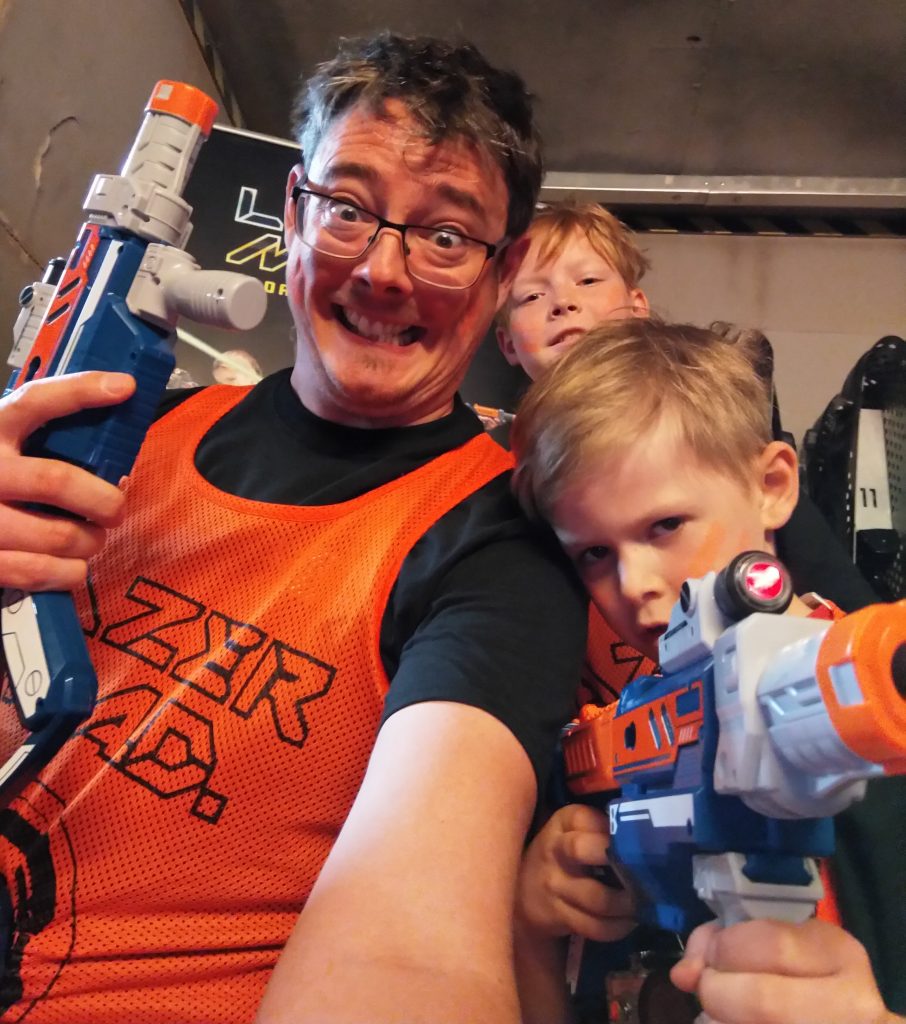 On a baking hot Saturday a couple of weeks ago the boys and I drove down to Greenwich to sweat a lot in a concrete basement. I sweated so much I had to change every single item of clothing I was wearing. It turns out, having fun in the heat makes you sweat and we had so much fun playing Lazer M.A.D. that I must have lost a couple of pints of fluids.

Lazer M.A.D. is a blaster game that you can play in an underground bunker in Greenwich but you can also play at home, in your garden, or in the office (if your boss is understanding). I have to admit Ned’s enthusiasm and excitement as we headed to the event was probably matched by my scepticism- “toy” versions of almost everything tend to turn out to be rubbish, from low megapixel cameras, to drones that crash or fly off and get lost, the market doesn’t have a very good track record in making stuff that is good in anything other than an advert.

I have to say though that two weeks after the event, and two weeks playing quite a bit of Lazer M.A.D. at home with the kids, I’ve been proved pleasantly wrong.

Lets start with the equipment. In each pack of Lazer M.A.D. you get two blasters, with various modular attachments that affect the range and the rate of fire. you also get a little harness and a target (much like you would if you went to an actual Lazer Tag venue). The first thing that impressed me was the durability of the blasters and the add-ons. I could see that they had a bit of heft to them and didn’t look like they would break that easily. Build quality (and general style) is fairly similar to everyone’s favourite dart propelling blaster system and that’s no bad thing in my book. Each of the add-ons snicks on positively and after a few weeks of play haven’t i) been lost or ii) become loose.

Of course, like all these devices, the Lazer M.A.D. blasters aren’t really lasers, they use an IR transmitter that is pretty powerful and pretty focused. As a chap who has been on several 9/10 year old laser tag party teams, I really couldn’t tell the difference between the Lazer M.A.D. stuff and the “professional” gear.

Given that you can use the blaster in different modes, it’s great that you have to reload it (there is a pump action slider on the top, so you too can be Linda Hamilton from Terminator 2 and do it one handed if you really want to be). The target also shows the number of lives you have left, which is handy too.

Although there are no real set rules, since you can set the blasters and targets to “friend” or “foe”, it’s possible to play team games and also, if you set everyone to the A team on the blaster but the B team on the target, you can also play last man standing, or Fortnite in real life as the kids termed it.

Even with the two player advanced battle ops set we played with (and bought home with us), which retails for £59.99, you can have a lot of fun, although if you’ve got a few friends with a set, the fun exponentially increases. The price isn’t prohibitive either if you do want to add more sets to your collection and join in with your kids.

Ned, our six year old, loved Lazer M.A.D. more than I can really articulate. It took him most of the drive home to calm down, and the next hour or so getting excited about playing on his very own set. I was surprised and impressed too. Have I mentioned how hot and sweaty I got playing Lazer M.A.D? Yes? Well that’s probably testament to how much fun we had playing!