Our house was built in the 1960s and one of the ways we get an insight every day to how different things are in 2018 to 1968 (Happy 50th Birthday house!) is the aggravation we inevitably have when it comes to plugging stuff in. Each room has at most two plug sockets, which in this day and age simply isn’t anywhere near enough. And boy do we have things plugged in- from computers to grills, to smart speakers, everything seems to come with a power brick and a plug today. Ironically, even the 1970s stereo we’ve recently inherited needs two plug sockets, which suggests that power strips were pretty common in the 70s too.

And it is true for us that almost every plug socket has a power strip on it, with various devices and chargers plugged in. Sometimes in the middle of the night I wake up in a cold sweat wondering how much electricity half our stuff uses on standby and whether cumulatively it would be enough to put one of our kids through university. Both our bigger tellies (50 and 60 inch respectively) don’t even have a physical on/off button; they’re either in standby or switched off at the wall and since the cables are tucked away from sight, turning them off at the wall every night is a bit of a chore, especially when one of the kids wakes you up at 6am because the TV doesn’t work. 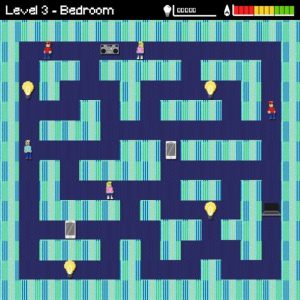 British Gas have developed a game to let you see what uses electricity and how, with the idea that it creates an awareness of the things that use a lot of electricity. Much like a smart meter will let you see what is being used, and make you conscious of what needs turning off or using sparingly to save you money. I have a friend who was shocked to see the electricity usage of his big plasma TV after he got a smart meter fitted. He went away and looked up the actual power consumption and worked out that if he bought a similar size modern LCD TV the saving in electricity between the two would actually pay for his new telly before the warranty on it ran out.

The British Gas Smart Meter Maze game lets you get an idea of how much simple things like turning off lights or game consoles will save you, all wrapped up in a lovely retro pixel art style. I particularly like the way it shows the kids running around and turning everything on ALL THE TIME. It’s very realistic in that respect. 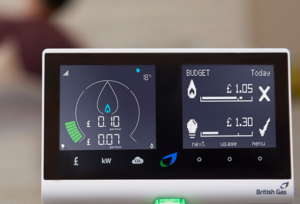 That’s the beauty of a smart meter really. It won’t magically save you energy on its own but there is something about seeing a £££ move that focuses the mind and makes you more energy conscious. I even did the experiment of setting our TV to ECO mode to see what difference it would make. Initially the screen looked a lot dimmer but since we mostly watch TV in the evening with the lights off, we soon adjusted as the saving, although small, was another step towards being more frugal with our energy usage.

And in case you’re wondering, I scored 23,000 on the Smart Meter Maze game. Try and beat that if you can!