Monday’s need to be carried off with military precision. Ned now goes swimming with a friend’s family after school on Monday, so we don’t have to pick him up from after school club but I have a 75 minute window to get home from work, cook and eat dinner and then leave to take Fifi and the boy to their respective drumming and piano lessons.

I’m pathologically against the idea of a jar of pesto over some hastily cooked pasta, or chucking chips and fish fingers in the oven, so I’ve been devising a range of quick to cook meals for Mondays (occasionally we go for jacket spud in the slow cooker but this generally meets with howls of disapproval, so it’s a worst case dinner) that can not only be cooked in under an hour but cooked and eaten in under an hour too.

First on my list is the patented Alex & Harry Lancaster university chilli from 1995. Or rather a modern variant on it.

There are two ways to cook this, both start with a 500g packet of mince (lamb or beef, we’re easy). The first method is the more straight forward in that it uses all 500g of mince. The second sees the mince split 60/40, with 40% used in chilli and the rest kept for another night to go into a spag bol or cottage/shepherds pie (there is a difference: cottage= beef, shepherds=lamb!). The reason for the unequal split comes down to the chilli having more additional ingredients in the sauce; kidney beans, black-eyed beans and maybe if you’re in the mood for it, some sweetcorn. 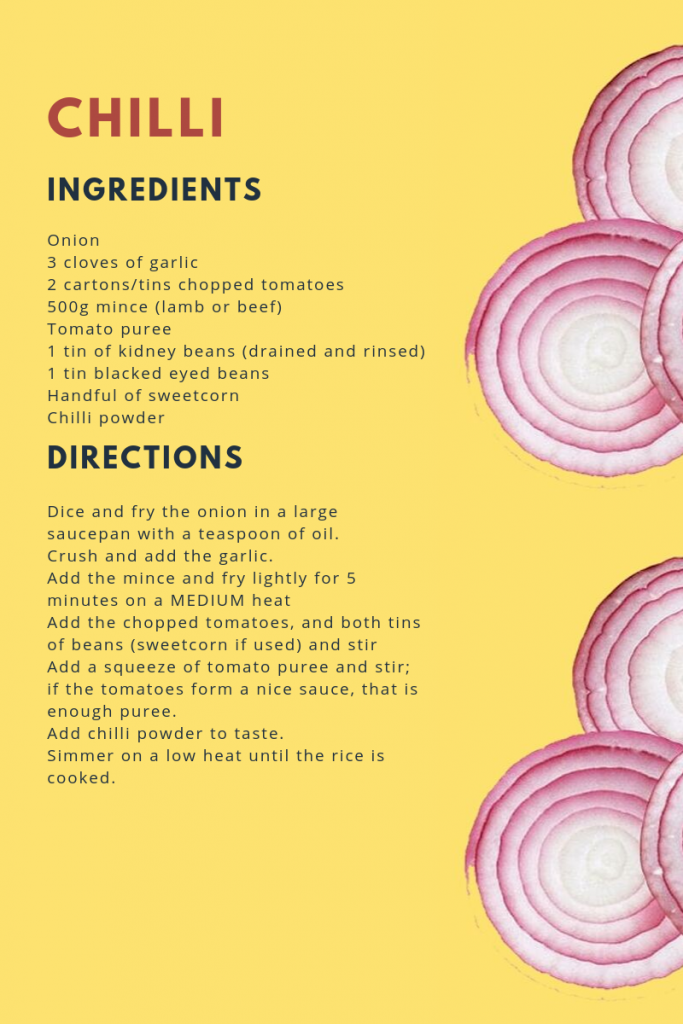 The key to this recipe is to make sure you don’t turn the hob up too high. It’s always a temptation when you’re in a hurry but you’ll end up with dry meat that’s hard and won’t absorb the sauce. If you let it brown gently, and then let the final chilli simmer for ten to fifteen minutes, you should have a luxuriant sauce that’s still taken you under half an hour to cook.

On a Monday I always tend to cheat with the rice and use the microwavable sachets that take 2 minutes to cook. I’m generally a bit rubbish at cooking rice anyway, and I’ve been meaning to get myself a rice cooker for ages.

If you do choose to use all 500g of mince, there will be a fairly high chance that you’ll have some leftover chilli- we tend to and that’s with 5 of us scoffing it. Chilli is one of those dishes that defies logic and actually tastes better once it’s been frozen, defrosted and cooked again, so never despair when you’ve got leftovers.

This is a meal that tends to sort the kids out prior to music but does leave them with an orange sauce-moustache if I’m not careful!