We’re at dilemma point with Ned (who is 8 in January) over his guitar playing. Like most of our children, practice is seen as a chore to him. In the past we’ve dropped the boy’s guitar, and Fifi’s guitar because they didn’t practice enough (the boy doesn’t practice his drumming as much as he should but is still heading towards grade 3 with speed, and Fifi is just about doing enough piano practice to justify continued lessons). The problem is, Ned doesn’t play anything else, so it’s not as if he is doing something badly while doing something else better.

We’ve talked about it with his teacher, who is great, and is also MY guitar teacher (I got a guitar for my 40th and am slowly but surely learning to play it), and he says Ned would regret stopping because he’s learnt a lot but there is no point in him continuing if he’s not going to put some effort in. As Ned and I have consecutive lessons on a Saturday morning, I thought this would mean that we could practice together. Well, I spent most of last nights masterclass by Arsenal (I don’t get to write that very often any more) learning how to play Wish You Were Here: 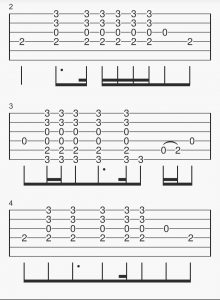 with Ned sat next to me, resolutely failing to practice Chasing Cars from the Grade 1 Rockschool book. He didn’t even do five minutes and while I wasn’t quite into Bryan Adams “played it til my fingers bled, was the summer of ’69” territory, my fingers were sore by the end of it.

And so we reach the conundrum. Ned will regret giving up and it will take forever to get him onto a waiting list and back into lessons if he changes his mind (and almost certainly not the lesson next to mine) but, and it’s a big but, the lessons, even his 20 minute a week lesson, aren’t cheap, especially if there isn’t any practice going on. At the moment I sort of feel like he’s trapped in that vicious circle of not practising as he’s not developed the finger tip callouses that practice gives you that means your fingers don’t constantly hurt but can’t break out of it. He knows all the major chords, can do some power chords, and is even getting better with his pinkie movement but there is only so much 20 minutes a week can do for you.

I’m the biggest lover of music in our house but I’m also the most unmusical when it comes to innate talent. It’s going to be such a shame if I end up being one of the best musical instrument players just because I’ve put the time in.

We’re still not sure whether to push Ned to keep it up or just let him give it in. I’m secretly hoping I can convince him to practice in the next week or two as we need to make a decision to give a half terms notice by 25th October…