Being woken up at dawn by blood curdling screams isn’t the best way to wake up but when it’s something you’ve planned and it’s worked perhaps better than you had any right to hope for, well it’s a mixed feeling of success and chagrin!

Anybody that know’s me will know I love a gadget or a bit of tech. I’m often mistaken for someone working in IT* as I tend to obsess about that sort of stuff to an unhealthy degree. Consequently when I got a Samsung Smartthings hub last year on an Amazon Lightening Deal, I had more planned for it than the sensible. 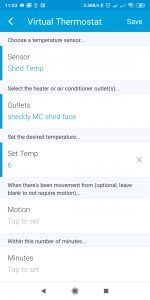 The sensible in this instance was to set up a virtual thermostat in our summer house. Our summerhouse is a concrete and wood affair and has an under the counter freezer in it. It’s useful for pizza and ice lolly storage but it’s not a certified outdoor unit, so we have to ensure that the environment is kept within the tolerable operating limits. With my Smartthings hub, a wireless Xiaomi temperature sensor, and a smartplug, an oil filled radiator gets turned on when the ambient temperature inside the shed drops below 6 degrees. It’s only a 15 watt radiator, so it doesn’t get hot quickly or use endless electricity but it’s quite handy.

So that was the boring reason I decided to get a Smartthings hub but there is so much more you can do with them, and there is a lively community who integrate third party apps and sensors into Smartthings.

Being a tinkerer who has more imagination than ability, I set out to do something funny with my Smartthings hub that ended up in screams and me and my wife being woken up at just gone six in the morning. I think I’ve been forgiven but only time will tell.

As well as the temperature sensors, Xiaomi also make motion sensors. Battery operated stick up motion sensors to be precise. And they’re cheap. They’re a little bit fiddly to connect to the hub but once they have been connected, you can use a straight forward menu to trigger an action: 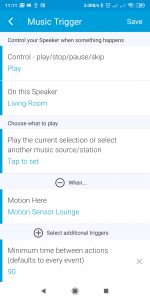 There were a few extra conditions I added. The routine was only live between 5am and 6:30am, the time that the kids would normally creep downstairs and start watching telly, even though they were under firm instructions to stay in their rooms until 7am and read a book if they couldn’t get back to sleep.

And so the morning after I’d set the routine up, the blood curdling screams occurred. You see, Fifi had sneaked down at 5:40am to watch some telly, only to trigger the Smartthings routine, which blared out Mike Oldfield’s Tubular Bells at her. You may know this better as the theme from The Exorcist .

The kids haven’t seen the Exorcist, I’d like to make that clear, but the music is probably the second most spooky bit of music I know after the main theme from Suspriria by Goblin. It must have taken about half an hour to calm Fifi down afterwards but at least the point was made about not going downstairs to watch TV before dawn!

If you fancy having a play with Smartthings, the hub is £59.99 from Amazon, and the Xiaomi sensors can also be had from Amazon (although if you’re willing to order them from China, they’re a lot cheaper, but will take a lot longer to deliver).

*that is until that somebody asks me for something particularly technical, then I tend to come unstuck and dispel the myth rather promptly. Although, like most of the IT professionals I know, Google is my friend.