If you follow me on Twitter you might know this has been the year of getting fitter. Since the turn of the year I’ve lost over four stone and have dropped my BMI from 35 to 27 (so there is still someway to go but I am getting there). With the lockdown that we’ve lived under for almost two months at the time of writing, team participation activities and swimming have been out of the question so it’s been down to walking and cycling for my exercise.

I’ve been using a mixture of Runkeeper, and Google Fit with/without the GPS tracking enabled but to be honest as I’m what they might call a power user when it comes to smartphone use, it’s not been great as the GPS really hammers the battery on my phone. If I turn the GPS off and just use my phone as a step counter, it’s really inaccurate too- up to 20% off when it comes to total distance, which isn’t acceptable.

I’d spent a while looking online at GPS sports watches, ranging from the bottom end Garmins at around £150, right up to £400+ top end models but you know, I’m 45, overweight and in reality that’s overkill for most people, let alone me! After a lot of searching around, I saw that the previous generation Huawei Band, the Huawei Band 3 Pro to be precise, seemed to have pretty much all the features I wanted for £39.99. That’s about a tenner more than budget step counting bands, and half the price of a Samsung equivalent that doesn’t have GPS. I’ve had a couple of Huawei phones in the past and have been impressed with the build quality, so I decided to give the Band 3 Pro a punt.

Given the current American war on Huawei, it’s necessary to download the Android app directly from the Huawei website as it’s not on the Play Store but that’s not difficult and set up is pretty easy.  You get the choice of three watch faces, and the app allows you to fine tune the display, turn phone notifications on/off and when the screen turns on/off. Since my main goal was to stop the drain on my phone battery, I turned notifications off and set the screen to touch to wake to maximise the battery. Despite the price, the Huawei Band 3 Pro looks pretty nice: 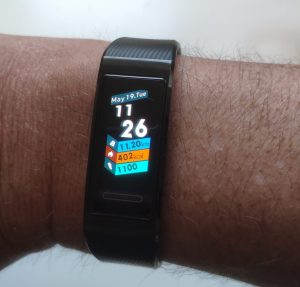 Using it to track steps is automatic but if you swipe down on the screen, you can choose a specific workout that includes running, walking and cycling. Choosing one of these activates the GPS, which I’ve found takes comfortably under a minute to lock on the satellite signal and you’re good to go. You get vibration notifications when you hit certain distance markers, mine is set to KM, so I get notified every kilometre I hit. I’ve done the same walk about a dozen times now and the tracked distance is within a handful of metres, which is probably accounted for by me scurrying across the road to social distance from people.

Some people have had issues getting the data to sync with Google Fit (and then in my case on to MyFitnessPal), if you have an issue, this sorts it out for you. It wasn’t a problem for me.

Battery life is currently somewhere in the region of 3 days with 2-3 hours of GPS tracking a day when I’m out on my bike or walking, so I can’t complain about that. Obviously it’ll be less if you use the GPS more, or better if you don’t.

The Huawei Band 3 Pro is waterproof to 5ATM, which sort of means 50 metres but in reality means you’re okay to go swimming with it (when you move underwater, you increase the pressure which lowers the depth that something rated to 5ATM can safely operate at). Not that any of us are in the pool just yet of course.

Personally I think the Band 3 Pro at £39.99 is a bit of a no brainer if it fits your usage needs- GPS tracking, reasonable battery life, and a great price. It won’t handle music, so if you like to listen to music while you’re exercising you’ll need to either use your phone or a portable player for that but then something that does offer music playback, like the Garmin Forerunner 245 Music, costs around £300, so it’s not much of a comparison really.