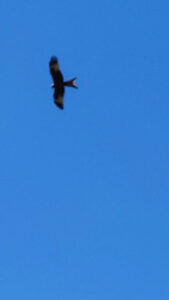 A red kite, seen on an early morning walk during lockdown

I did a Sainsbury’s Click & Collect the other morning at 7am, a couple of days before the high street shops were allowed to reopen and if it wasn’t evident to me already that lockdown is functionally over before I went, it was by the time I got back. Three weeks ago at the last C&C, the member of staff and I had a shouted conversation at a distance, when I got out of my car to load the food, he got into the cab of his truck and shut the door. He didn’t get out until I got back in my car. This morning a different bloke was leaning in to the driver’s side window of the car in front and having a chat with the driver. The driver was passing him the crates when he’d loaded the stuff into his boot. Three weeks ago we were all following the social distancing rules because we wanted to be safe, today I saw people halfheartedly following them because the rules said they had to and they might get told off it they didn’t.

This triggered me to think about putting some of my thoughts down on on what I’ll remember from the lockdown from the first wave of Covid-19 because thoughts are transient and much of what we’ve done has had an air of sureality about it whilst we’ve been doing it, in a year or so it will seem an absurd confection of misremembered nonsense and myth if we’re not careful.

It’s funny how the banal sits right alongside the shocking in terms of how I’ll remember lockdown. Grumbling about making Yorkshire Puddings that turned out like bricks with rice flour because no supermarket in the universe seemed to have plain flour seem to sit alongside the slow horror of friends and work colleagues losing parents, uncles, and aunts, and grandparents to Covid-19.

Stalin is often attributed as saying, “If only one man dies of hunger, that is a tragedy. If millions die, that’s only statistics.” Whether he actually said this is doubtful but as a country we sit with 60,000 deaths from Covid-19, I’m minded of it. As the deaths piled on, accelerating towards 1,000 a day at a seemingly relentless pace, the cold hard ache of background terror seemed to always be there in April. 20,000 deaths would be a good outcome we were told in mid March, a total we hit a little less than a month later.

Somewhere around the end of the first week of lockdown, we stopped watching the television news. It became pointless because the reporting was so poorly done. Sitting a corespondent outside a hospital makes a great spectacle but little more than that. If a few less people died on Wednesday compared to Tuesday, the reporters started asking whether we’d turned a corner. Science was treated with an almost incomprehensible mysticism, as though it was both immutable and unfathomable. I switched to online news sources, like the fantastic Ars Technica comprehensive guide to the Corona Virus. The BBC also seemed to slip into a war time mode, perhaps pushed their by the Prime Ministers rhetoric that treated the virus like “enemy” to be “fought”, and reporting on government press conferences became more an amplification of what they were saying than a critical dissection of what was happening.

The first couple of weeks of lockdown are a blur already, we had Covid-19 during that time, I remember being unable to get warm, shivering under our winter duvet in three jumpers and feeling terrible. Supermarket deliveries were almost impossible to get, all the things you wanted were out of stock and half of what you ordered didn’t show up. It was a scary time. The attitude in the office had swung from everything being a stupid overreaction to full emergency mode in a very short period of time, and that in itself was worrying.  The weather was horrid, cold and wet out, and the heating didn’t seem to take the edge of the chill. Home schooling was a novelty and the Easter holidays were only just around the corner, so it seemed like an achievable goal to get the kids there. 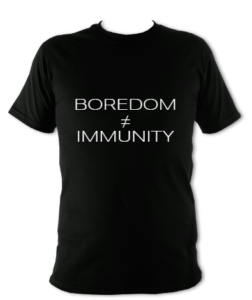 Do you remember those days?

Specifically do you remember when people took the lockdown more seriously because it was new, fresh, and really really scary?

In that first few weeks the only time I went out of the house was into our back garden. I actually wore a path around the edge of it, I walked so many laps there. The next few weeks were fraught with trips to Great Ormond St Hospital for ultrasounds, MRIs and eventually a biopsy for one of the kids. Stressful enough at the best of times but in the middle of a full lockdown pandemic, with only one parent allowed to come, it’s not something I’d like to repeat (and hopefully we won’t have to).

At some point in late April I started taking my daily exercise outside of the front door. I found a good route that whilst horribly dull to look at, allowed for good lines of sight, and the ability to cross either to the middle or the other side of the road if I saw people. It was a little over 6km, and I’ve walked that same route every lunchtime, listening to an audiobook, every day since. I even bought a cheap GPS fitness tracker, and have just hit 300,000 steps/260km in under a month. Unfortunately my poor wife hasn’t been able to join me because I probably broke her ankle in early April by leaving a pair of sandals outside the backdoor. She twisted her ankle really badly and by the time I took her for an x-ray, it was too late to tell whether it had been fractured or not. I’m still feeling guilty over this….