Lockdown has sort of officially ended but as a country, we’re not really returning to the office yet in massive numbers, as working from home has proved successful for many and let’s face it, encouraging people to return to the office AT THE START OF THE SCHOOL SUMMER HOLIDAYS was never going to be the greatest piece of joined up thinking from our illustrious leaders.

We’ve continued plugging away at work and household life, which has settled into a bit of a monotonous drudge. The monotony has been alleviated by the lack of rushing around, chasing our own tails, with extra curricula lessons and activities for the kids, and the commute to work more or less done away with. I read a great quote from a senior partner at PwC, a firm that is infamous for it’s long hours, where he said presenteeism is dead. Great soundbite but I suspect the reality will be different! 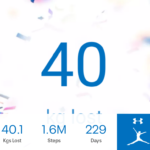 A lot of people seem to have been putting weight on during the pandemic, gym going exercise curtailed and food and beer offering a happy distraction from sitting around at home all day. Happily I’ve managed to keep up the momentum that the Shape Up! course I did, started back in January. I started the year at 21 stone/130KG and by the start of lockdown was down to 17 stone/110KG. A few months further down I’ve now dropped below 90KG, and *just* under 14 stone. I might have been around that when I got married in 2004, I definitely wasn’t by the time we had kids. I feel a lot better for it and have to say it’s not been anywhere as hard as I thought it would; the cravings for beer, chocolate and crisps subsided very quickly and controlling portion size wasn’t much of a struggle.  Most of the exercise I’ve taken has been walking, around 10KM a day on average, with some cycling thrown in back in June. I definitely feel better for it.

In some ways without a pretty disastrous 2019 (I lost my mum after a long and painful illness), which saw me pile on the weight (well, at least 3 stone of it), I might not have reached the tipping point where I had to make a significant change. It’s difficult to not be a bore about it all to be honest; there are precious few other hobbies it’s still possible to undertake during Covid-Times after all.

We had the dreaded “staycation” last week. Dreaded in the sense that we did have 4 weeks away booked for this year, none of which has actually happened. The first two, April and May, were slap bang at the worst part of lockdown and given how stupidly a of people have been behaving since, we didn’t feel safe for the July and August holidays we had booked as they were a camping holiday with communal facilities and to a very popular tourist area respectively. Instead we racked up a few hundred miles doing day trips to places we’ve not been to before.

I tried to film a few 360 degree videos while we were out so that we’ve got a taste of the outdoors when we’re stuck back at home. They work with or without a VR headset and you’re welcome to spend 15 minutes on a coastal salt marsh if you like!

The kids are now all gearing up to a return to what will be a very different school experience for them and this is causing differing levels of anxiety for all of us. Wish us luck!