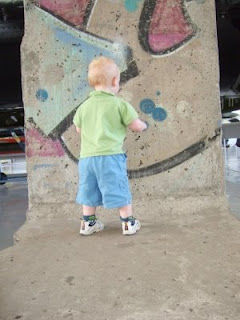 “M’laddo, get down off the Berlin Wall, it’s not for jumping on!” joins the list of things I’d never thought I’d be saying. And it joins the list pretty close to the top I can tell you.

Sunday saw us load up the battle wagon and head the 41.6 miles to Duxford for a day of fun and excitement running round the hangars looking at airplanes and pointing at things taking off.

We’ve taken the wee fella to Duxford before, and even though it was a cold windy day, he loved it. How much moreso did he love it on Sunday when the sun was shining and the planes were flying? A lot is the answer.

True, there were some moments of frustration as we told him he couldn’t actually fly a plane himself (I’m sure he thinks he could and I blame his burgeoning video game addiction for that) but this soon melted into insignificance when we made it to the American Aircraft Hangar (AKA the Wonderful Awesome Place of Ultimate Running). The great thing about the American Hangar is the gentle ramp down each side, the large enclosed space and the ability to go right under all the planes with little or no cordorning off. This means M’laddo can run around for literally hours on end without escape and its fairly easy to keep an eye on him.

I’m pretty sure he now knows the difference between an F111 and an F4 Phantom, and he knows that they fly too- he was very excited seeing various small aircraft take off (I somehow missed the B52 taking off, which was a shame), he was able to associate the stationary planes to the flying ones, which just made the whole thing more entertaining.

The nipper went on Concorde 3 times, drank too many fruit shoots, and had a jolly spendid time all round, topped off by dinner at Nana’s with half a kilo of chicken to fill him up (some of which unfortunately came out in the bath last night- hey ho, you can’t have everything).

Needless to say we were both exhausted, me from running around with M’laddo and wifey from pushing the Phil & Ted’s round with baby sister in it. The hot sunshine is certainly sapping when you’re not used to it.

It’s just a shame M’laddo got to sleep in until 9.30 the next morning when his sister had us up at the crack of dawn with her talking and incessant leg jiggling.