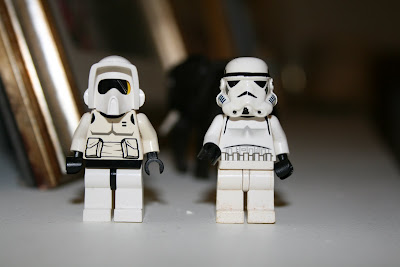 When I was a nipper we had older cousins who did the cool thing of passing down stuff that they had out grown to me and my little brother. They were around 10 years older than us so we got some really ace (if a little dated) stuff. This included about half a tonne of Lego. Over the following few years my Mum and Dad added as and when birthdays and Christmas’s required.
Lego is every expensive if you want to build up a good selection of stuff to let youngsters let their imagination fully loose it can be very expensive if you don’t have older cousins. My Lego is now living in my parents loft until M’laddo is the right age to get stuck into it but thanks to the incredible cleverness of Wifey, coupled with Oxfam, we have a new awesome supply of Lego. She managed to get several kilos of Lego, including the Star Wars figures (and probably a couple of ships once I sort it out properly) for the princely sum of £8.
I’ve been a fan of “proper” Star Wars since I was a nipper myself, so the chance to play with some actual Lego Star Wars, which only came around when I was a student, was frankly too much to pass up.
I really hope that M’laddo will have as much fun building things and being creative as I did when I was younger. If he gets halfway to where I did with my imagination, he’ll have a wizard time.