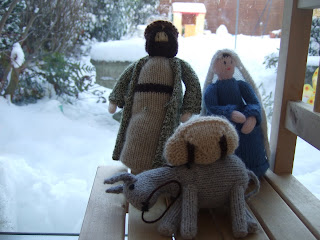 We took delivery of the local Church’s Travelling Crib on Friday and passed it on to the next family on Saturday morning.

The travelling crib is a Mexican idea whereby representations of Mary, Joseph and the donkey on their way to stay at Bethlehem spend a night during advent at a different house in the local community. In theory it’s a way of all the local families getting to meet.

I say in theory because what the Church suggests and what the congregation actually do are two entirely different things. This is the first time we did it and the instructions say the Curate will do a little 5 minute sermon, we’re to provide mince pies etc for the family dropping it off and so on- a real chance to get to know other families with children in the community.

What actually happened was the “family” (mother) dropping it off, literally did just that, ding-dong, doorbell rung, open front door, here you go- merry Christmas, goodbye! And it was worse dropping it off- we ventured out in the ice and snow, Wifey rung their doorbell, the door opened a crack, the travelling crib was passed through the crack and that was that.

It depresses me that as a nation we can take a great idea and manage to remove the one thing that makes it great from it, rendering it pretty damn pointless.

I’m going to speak to the Vicar about it and try to make sure it’s done properly or not at all next year.

At least it gave us a chance to talk the Christmas story through with M’laddo though, which, combined with the carol service we’re off to on Christmas Eve, should give him some idea that the Christmas Story isn’t exactly the same as Disney’s Santa Buddies.