One of the things I never anticipated about having children was the sheer physical strength it would require. Whilst I’m no gym honed Adonis, I do have a fair degree of strength. I have no trouble lugging large amounts of flat pack furniture around, moving immovable objects or slinging wifey over a shoulder should the occasion demand it. Standing there with a six month old cradled in my arms for protracted periods of time though, was another form of strength and I was pretty crap at it. I mean, a small baby can’t weigh that much can it? Apparently so and after about ten minutes my arms used to ache like mad.

Nowadays though I can march through central London at speed with our three year old attached and supported via one arm (he can sense weakness, and when he senses it, he refuses to ride on my shoulders, the little tyke). He’s not light either, he has a certain density to him that I’m sure will cause letters from the NHS telling us he is obese in the future but he’s hardly got an ounce of fat on him. He is the personification of distilled and concentrated boy  and that’s bound to be denser than the run of the mill ordinary children. 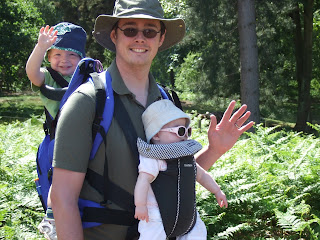 Aside from my walk to and from work, lugging the pair of them around is about the only exercise I get at the moment. There have been rare occasions where I’ve had M’laddo on the back in a baby rucsack and Fifi strapped on at the front in a baby sling whilst strolling around a RSPB reserve (note to self: don’t get RSPB confused with RSPCA, they Protect birds, not Prevent them) and that’s been a great workout, even if I’ve felt the need to wear a silly hat.