Because there’s a tendancy to watch what’s the latest thing out there, I’ve decided that it’s time to share my inordinate knowledge of film with you all. My Film Friday will be a mixture of kids films and adult films (NOT that sort you smutty so and so) from yesteryear that you no doubt missed, or have forgotten about. 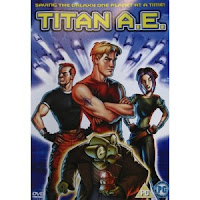 To kick things off, I’m going to start with Titan A.E. This is an animated film from Don Bluth (ex Disney dontcha know) that was one of the first to mix computer animation with traditional techniques. It’s a sci fi story with elements borrowed from all over the shop but it’s great piece of exciting entertainment. The voice talent is pretty hot too- it has Drew Barrymore, Matt Damon and Bill Pullman amongst others, as well as having a certain Mr J Wheldon credited as one of the writers.

The film is rated PG, there is a modicum of violence and some of the themes aren’t suitable for the really young but the animation is top notch stuff, as you would expect from an ex Disney chap like Bluth. If you’ve got kids that like Space Ships but don’t want them to get wrapped up in the endless amount of Star Wars Clone Wars stuff, then for £3.25 from Amazon, this is an excellent alternative.