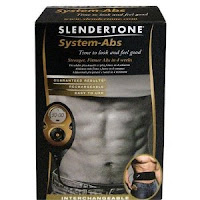 The first thing you notice when you take the Slendertone System Abs out of the large jiffy bag it arrives in is the general buff-ness of the models wearing the device on the packaging. Crikey, you think, why or earth is that chap wearing a Slendertone, it looks like his six pack has a six pack.

Obviously showing a chubby fellow like myself on the box art would hardly be inspirational but celeb keep fit DVD’s often show a before and an after and that’s the short of thing that would be motivational here.

Yes, I’m quibbling over the box art. That’s probably because I can’t find anything else to really fault this device over.

Lets go back a step though. I’m not an enormously sporty person at the moment. With two kids under 4 years old I don’t get much free time, what with work and standing on stickle bricks to keep me honest during the hours of daylight. I do walk around 5 or 6 miles a day though, to and from work with a 40 minute brisk walk at lunch time. I wouldn’t say this makes me an athlete but I’m not unfit.

What I’ve never had, even when I was cycling for hours and playing 5 or 11 a side football, is a flat stomach. I can’t pinch much flab, it’s not like I have a rubber ring round my middle or anything, I just have absolutely naff all muscle tone in that area. I’ve never been that fond of sit ups either, since they tend to give me lower back ache after too many and lets face it they’re a bit tedious.

When the opportunity came up to try a Slendertone System Abs, I decided what the heck, lets give it a go. I must admit I’d always slightly derided people who felt the need to repeatedly electrocute themselves in pursuit of a flatter stomach but I’m not getting any younger and I thought it might be the spark I needed to get going.

I’d tried a similar product a couple of years ago but to be honest you get what you pay for. That other device had been about £30 and painful to use at any intensity (and it pretty much decided what intensity it was going to give you all on it’s own. Perhaps it was in line with the phases of the moon or something, I certainly never twigged it and the manual wasn’t much help), so I binned it before it ended up hurting me. 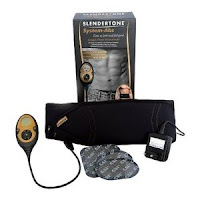 Slendertone say that their products work using EMS, electronic muscle stimulation, in other words electronic impluses stimulate nerves that cause muscles to contract. It’s sort of a more advanced application of wiring the legs of a dead frog to a battery and stimulating the muscles with electricity. But much more advanced and obviously rigorously safety tested by proper scientists and not 14 years olds in science classes. So not much like it at all really. Do kids even do that to frogs in biology at school any more? The technology has been safely used for over 40 years and is used extensively in the medical profession, so it’s safe and I wouldn’t want you to think my glib comments about electrocution are anything other than glib comments. I wouldn’t attach anything to me that isn’t safe, my body whilst not being a temple, is the cornershop just round the corner from the temple, with a take away next door- it’s in line of sight of the temple so guilt stops me doing anything too outrageous.The Slendertone System Abs isn’t cheap in itself, the RRP is £119.99. Looked at objectively, that’s £120 that you can’t spend on cake, beer or take away, so even before you use the thing, it’s already made you stop putting on weight. I suppose it’s about the same cost as a couple of months sitting on your sofa feeling smug because you’ve paid a fortune to join a gym so you can get fit by osmosis or the simple act of carrying your membership card in your wallet and your gym kit in the boot of your car. Joking aside though, what you do get for your money is very well built and durable. The package contains a belt that fits all but the fattest of chaps (and I’m talking here as a bloke who couldn’t get a babysling on because it wasn’t big enough), a set of four pads, a mains adapter, a storage pouch and the swanky plug in computer thingy that controls the who shebang. I’m not entirely sure for that price Slendertone shouldn’t be chucking in a spare pair of pads, even my wifes TENS machine came with a spare pair of pads and that was a third of the price but that’s a minor quibble.

Slendertone had asked me to have a go at the 30 day challenge. This is basically a programme in the rather detailed manual that you follow for noticeable results in a month. I had a slight hiccup in following this in as much as I didn’t RTFM before slapping it on and using it. A bit of twitter conversation with Yuri just lead us to a macho game of who-can-have-the-highest-intensity which while fun, meant that ten days in I had to have a two day break and actually restart it all properly. That was entirely my fault since I never read instruction manuals (it was 3 days before I realised that the two buttons on each side did the intensity for that side of your stomach).

So once I overcame the inherent stupidity of men*, I was away. The 30 day challenge programme is well designed, even for someone with absolutely naff all stomach muscle definition to start with. It never felt like I was being pushed past the point of comfort. I did occasionally look ahead to 3 or 4 days time and think, “oooh, that’s going to hurt” but by the time I got there my muscles were ready for it. To me this suggests that the Slendertone System Abs is doing an admirable job. If I’d set the intensity to 70 on day one I think I would have been on the floor having some kind of fit of involuntary twitching but by the allotted point I was strutting around the house manfully in my pants (you can wear it with trousers but I was in full pants strutting mode myself) commenting on how awesome my abs were becoming.

I think I might have even mentioned on twitter that I was eating a bowl of popcorn and swigging a can of Fosters, while watching the footy, with the Slendertone switched on at one point. Beats doing sit ups.

So after a month do I feel any different? The answer is yes. Of course I don’t have either the fake tan or the definition that the chap on the box does but it is nice to be able to relax your stomach muscles and let everything hang out, without actually realising you were tensing them in the first place. The Slendertone System Abs doesn’t claim to be the be all and end all of stomach toning and of course this sort of thing works best in conjunction with a regular exercise regime but as a device to kickstart the revolution and speed it along in a really noticable manner, it definitely gets my thumbs up. I’m off to order some more pads for it, the last ones have so much stomach hair on them that they’ve lost their stickiness!

*talking of the inherent stupidity of men, one of the first things I was asked at work by the chaps I work with when I said I was using a Slendertone was “have you attached it to your willy yet?”. Understanding men perfectly, Slendertone actually say in their manual that the device should not be attached to your genitals.