It’s been about 5 or 6 months since the Boy’s war of attrition started. It was one of the reasons we decided to let the kids swap rooms and give the wee lass the larger of the two rooms. Every night without fail we have the “But I don’t like my room” moan and he tries to bed down for the night in our room.

We’ve tried everything from leaving his big main light on to giving him books and stuff to read, all to no avail. On the nights we manage to get him to stay in there, it’s often a case of dumping him in his bed and legging it to the door before he escapes out of the room (he’s a very speedy chap). After ten minutes of wailing and crashing about he often climbs into bed and goes to sleep. 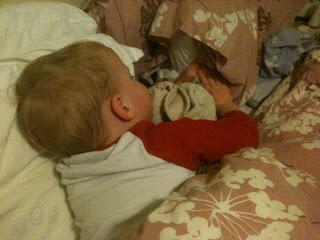 On the times he doesn’t go to sleep and carries on shouting and banging around for half an hour or so, we end up putting him in our bed until he’s sound asleep. When he’s sound asleep, he’s really asleep and I can just pick him up and carrying him to his own bed.

Just as an indicator to how deeply he sleeps, when he was coming up to 2 years old, I popped in to check on him before we went to bed ourselves. He was asleep but a poorly fitting nappy meant his sleep suit, cot and duvet were soaking wet. I managed to take him out, give him an entire outfit change, remake his bed with fresh sheets and get him back in without disturbing him. Thats a heavy sleeper.

It’s not the ideal situation but in cold weather it is handy since it means my side of the bed has been warmed up a bit.

Having said that, if he could explain why he doesn’t like his room, it might help. We’re in the process of redecorating it and I had a bit of a spooky incident whilst painting it the other night. It was about 11pm and I was slapping paint on with the roller and having a merry old time but I got the distinct impression I was being watched. Nothing. It got so bad my shoulder blades were itching and I had to finish the painting looking at the corner of the room where the feeling was coming from. Probably spooked myself but it was completely different the following night when I did the second coat. Perhaps there is a very good reason why he doesn’t like his room…