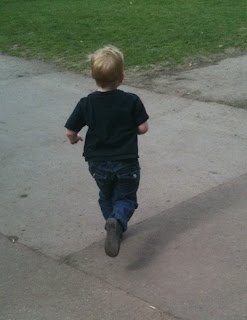 We’re at that stage with the two kids now where they’re both fairly independent in terms of locomotion. Fifi has just got a scooter and is gaining confidence and speed, two things the lad has in spades. This makes it a bit tricky going out with the two of them at the same time. Fortunately in this sense the lad is usually really well behaved, he never goes out of sight and always stops when I give him a shout.

Unfortunately the little so and so isn’t quite as well behaved on foot. I suppose it’s because threats of having his scooter taken away make sense to him but you can’t exactly threaten to take his feet away when he runs off.

His running away isn’t confined to a bit of a random sprint when we’re outside either, he often informs me “I am off to my bedroom and you shall not follow me!”, which is the prelude to a speedy stomp upstairs and a loud slamming of door. After an indeterminate interval (if there is a logic to it, it’s a 4 year olds logic so I can’t follow it), there is usually an opening of doors and an even louder shout of “Daaaad! You must come and get me now!”

I tend to wear my trainers out and about with the kids now- it’s safer on the off chance I have to out accelerate either of them :)