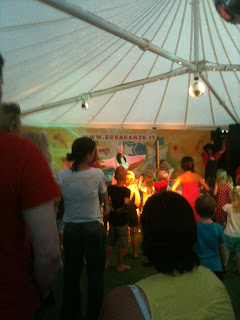 At nine o’clock in the evening I never thought I would be sitting in a marquee with two hyper active (and probably over tired) kids. After a day out (without the buggy since we didn’t take it on holiday with us) that involved a boat ride, a trip to a castle and a bit of drama as bunny got lost (and then found), we thought they’d both be exhausted.

They’re both doing some sort of wrestling/dancing hybrid at the moment which will likely end in tears soon.

Mini Disco basically comprises a hilarious set of links between kid friendly songs in Italian and sort of English. I now wander around saying “Hi Five!” and “Mini Disco!” in a sort of mock Italian accent. It’s great fun.

We’re at the Altominicio resort just off Lake Garda in Italy courtesy of Thompsons Alfresco at the moment. Aside from the hail stones, electrical storms and being ripped off by the local car hire company (hint: pretending to be sympathetic after ripping someone off and saying you’ll only charge for one toddler seat doesn’t work when you charge for two AND your victims have a price list), it’s been a great holiday, and none of the problems we’ve had have been Thompson Alfresco’s fault anyway.

We’ve missed a bit of peace and quiet in the evenings, as we’ve been to Mini Disco nearly every evening. Might even have to buy the CD….