5 year old (who is obsessed with nature and animals) wants to know if dinosaurs are in heaven waiting for us and if not why not because it’s not their fault they were vicious – it’s just nature . . .

That’s the dead cute question Tara’s 5 year old asked them yesterday.  The problem is, in the West the concept of heaven is pretty tied up with Christianity and believe it or not Christianity can’t even decide on whether dinosaurs existed or not.

America is to blame really, or rather the problem manifested itself there historically and has begun to pollute the rest of the world. In America they have this idea called  Creation science that hasn’t really progressed from Enlightenment Europe- early European scientists, from Copernicus to Galileo to Newton believed (as did almost all Christians in their time) in a literal interpretation of the Bible’s account of creation. Most of them date the creation of the earth at around 4,000BC, and in the case of the infamous Bishop Ussher, 22 October 4004BC. That’s fairly precise, and you would have thought he could have spent his time more beneficially ministering to his flock or something.


Dating the creation of the world 8,000 or so years ago obviously doesn’t give much truck to dinosaurs and this bunch have plenty of trite pseudo science answers for why dinosaurs didn’t exist:-

Some scientists have made complete pictures of dinosaurs based on just a single bone or tooth or leg. Half of all ‘dinosaurs’ found are under 15 feet in length. If crocodiles grew large, skeletons could have been mistaken for dinosaurs. They could have easily used a whale bone to construct a larger dinosaur. 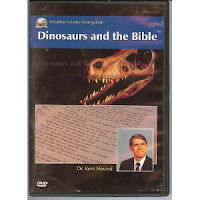 It’s sort of easy to laugh this off as a fringe nutjob element of American Christianity but when you look at a recent Gallop poll from December 2010 and see that only 16% of Americans actually believe in proper evolution, with 40% believing the world is about 8-10,000 years old and the remaining 38% thinking God directly had a hand in evolution, you do wonder how much longer kids will be able to ask questions about dinosaurs without being shipped off to a detention centre for correctional treatment. If you want to be depressed, read the reviews for this DVD on Amazon

Fortunately we’ve not been as polluted with all this mumbo jumbo anti intellectual nonsense in good old Blighty. I’d probably find it difficult enough to tell our 4 year old that a normal Christian would say animals don’t have souls so they wont be in heaven. Life is full enough of disappointments that this probably doesn’t matter, because raising kids isn’t about being right all the time is it? Besides, what if he came back with, “what about all dogs go to heaven?”, I can hardly tell him that basing his life perspective on films isn’t right can I?