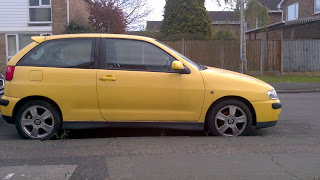 Twelve years ago you came into my life, sporty, more than a little yellow, and a real head turner. I remember the excitement of picking you up and the illicit joy of taking you on our honeymoon down to a lighthouse in Cornwall.

I worked you hard for the first few years, and put up with your faults- bits of you were more than a little unreliable. Like when I was driving to work and lost all the gears above 2nd. I limped along to the garage with you and they said it was probably just a coupling, it was impossible for the gearbox to go in a car that had only done 8,000 miles. Well, they replaced the broken gearbox but it was only a few months before the on/off button broke on the stereo, locking it permanently on.When it took SEAT 4 months to replace the radio, over the coldest part of winter, I chuckled in the cold and cursed. Cursed because the aircon was wired in to the same unit as the radio and I froze half to death. Still, at that point I could still wind down and wind up the drivers side electric window with impunity- it wasn’t until three years later the motor packed up with typical Spanish bad grace.

Yes, in many ways you were always a bit flawed, much like me. I should have realised really, picking you up a few weeks before I failed my accountancy finals in spectacular fashion. But 12 years and 80,000 miles later, I am sad to see you go. I’ve had a car, you or a little red peril, for half of my life now, but since the trailer came and took you away to the big breakers yard in the sky on Saturday, I am car-less.


If you would like to help me replace the yellow peril, with a peril of indeterminate colour, you could vote for me in Nissan’s Big Turn On here. Ten of us are competing for the grand prize of a Nissan LEAF. I’m the only driver without a car in the competition (HINT HINT).