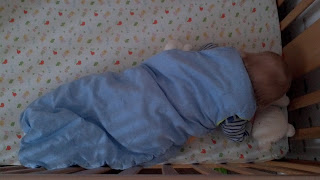 Our eldest two slept in various baby sleeping bags during their first couple of years mainly because we tend to produce wiggly babies. Danger is even more wiggly so when the Gro Comany offered him one of their best of British sleeping bags.

Whilst baby sleeping bags were fairly popular on the contient, they were only really available as an import product in the UK until the Gro Company was formed. We’re glad they were because our kids screamed their heads off when swaddled, kicked off blankets when we put them under them and even caused mischief in various sleeping bags.

The Little Aliens Grobag that Danger was sent shows that a sleeping bag isn’t just a sleeping bag though. We’ve had trouble getting his busy legs into popper up sleeping bags and we’ve also found that when he wakes up and stands up (rattling the bars of his cage), he often pops the shoulder poppers too. Once or twice this has lead to me spotting him running wild and semi naked at 2 o’clock in the morning, which is obviously less than idea. 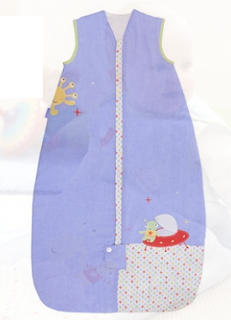 Grobags though have some great design features that stop Danger Houdini escaping and keep him comfortable. The Grobag unzips all the way down the front. At the top, there is a little flap of material that covers the end of the zip to stop it catching or irritating. At the bottom you can popper a cover over the end of the zip. This will stop your enterprising little darling unzipping himself and removing his nappy. Yes this has happened with Danger in the past in other sleeping bags, and thank goodness it wasn’t full of unmentionables.

The funky alien design is cute and comes in a 2.5 tog rating for a more than reasonable £29.99. The sizing means the 6 month+ (with the zipper) size will last your baby for well over a year.