The one downside of an electric car is that although electricity is pretty much everywhere, getting it sometimes can be a bit of an issue. Recently four public charge points were installed in St Albans. From a distance they look very space age, they have a blue glow about them and are shiny black.

Apparently the scheme you have to register with to use them is pretty affordable too. The main problem is, you just can’t get to use the damn things, which is obviously a bit of an issue if electricity is your only means of propulsion. 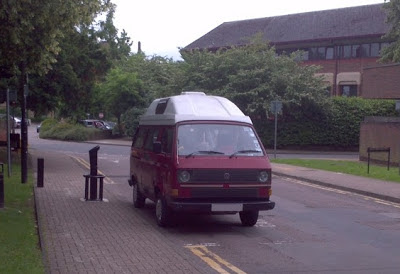 This is a VW Camper van (not an early example or it would have a split front windscreen) parked at one of the four city EV charge points. I’m fairly sure it hasn’t had a full electric conversion and is in fact just parked at the point. Perhaps they were hoping to plug the Campervan in to charge it’s batteries. Not without registering your EV, you’re not! 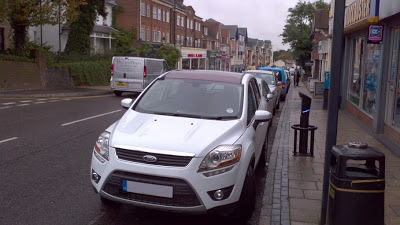 This is a Ford Kuga. Ford do not make an electric Kuga. It’s outside Blockbusters so I assume it’s someone in a petrol driven car who wants to drop off their rentals and is hoping (correctly) that a traffic warden wont bust them for parking in front of an EV charger. Personally, I’m amazed half the people I see in traffic warden outfits can even work the cameras they’re given to take evidential pictures with, so asking them to discern whether a car parked in front of an EV charger is actually an electric car is probably asking too much. Not that it’s clear whether combustion driven cars are allowed to park there or not I should add. 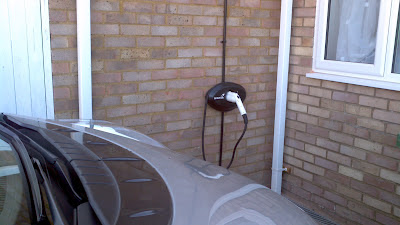 This is the charge point at my house. Note how there is nothing parked there that shouldn’t be parked there. At any point I wish, I can drive my electric car up to the British Gas EV Domestic Charge Point and plug my electric car in to charge. I don’t have to worry about members of the public taking liberties which might mean I don’t have the charge to get where I want to. Hurrah for me!

Seriously though, I have considered signing up to the scheme that will let me use the public points but I don’t want that inner rage simmering permanently as people are just ignorant selfish and park at them because they can when they don’t need them.