I recently went on a steak appreciation course run by Eblex, the UK trade industry for beef and lamb producers. They know a thing or two about meat, and also administer the Quality Standard Mark scheme that I wrote about on wifey’s blog. 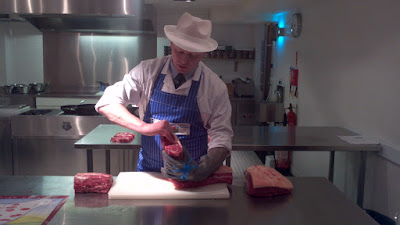 This time round I didn’t get to gouge out any kneecaps, which was a relief but I did learn an awful lot about steak. It’s made me evaluate my steak eating practices, which to be fair did tend to dwell on quantity rather than quality.

The main thing I took away with me related mostly to muscle groups to be honest. Some traditional cuts of beef go across several different muscles, which have gristle between them and cook at different rates. If you think about it, is there any real way that this could be optimal to eat? The big offender is the rump steak that’s made from 3 distinct muscles that all have a silvery membrane between them that is often impossible to chew when the steak is cooked. Plenty of other countries have traditionally cut the rump into several different steaks and this is something Eblex are working to get butchers and supermarkets more savvy about. Demand drives this sort of thing though and to this end, after we’d been lectured by a master butcher on how to cut the steaks, we had the onerous task of the TASTING. 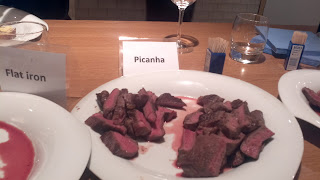 The Flat Iron, Picanha and Bistro steaks all tasted completely sumptuous, even nicer than a bit of perfectly cooked traditional sirloin but considerably cheaper. If I had to choose, I’d probably opt for the Picanha, which is a top sirloin cut popularised in Brazil. But that’s a narrow victory over the Bistro steak (aka the hanger steak, if your butcher isn’t sure), which was so tasty, it defies logic that it has often been discarded with the offal in the UK.

I’m a firm believer in eating quality meat. I’d rather spend a tenner on something that tastes great but we all have a smaller portion of than a tenner on half a ton of meat I’ll end up finishing off in sandwiches.