With the new Kindle Fire HD 8.9 out now, I thought it was high time I got round to reviewing the Kindle Fire HD I picked up for wifey when I went to the Amazon Summer Wishlist event on her behalf back in February.

We’re no strangers to tablets in our house, having a second generation iPad, a Nexus 7, (briefly) a Nook HD, and now a Nook HD+ (which replaced the Nook HD). We like our tablets. I have to admit, I use them mostly for consumption though, still finding a netbook much more convenient for creation.

I’m not about to enter a war of IOS versus Android, suffice to say, I used to own an iPhone, now I don’t and the iPad belongs to wifey. 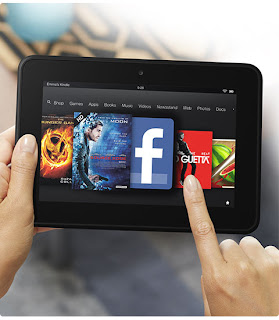 The Kindle Fire HD is as different from the Nexus 7 as it is from the Nook HD. The Nook HD is light, with an astonishing screen but quite limited in terms of apps, the Nexus 7 is heavier and more powerful but plain Android is a bit clunky. The Fire sits between the two; it’s heavier than the Nook HD, and squarer than both but has a custom interface that is good to use and in the Amazon AppStore, a lot more to chose from than Barnes & Noble manage with the Nook HD.

The position of the front facing camera on the Kindle Fire HD is a give away to the orientation that Amazon think you should use the device in- it’s on the side. This is a tablet that’s meant to be used in landscape mode rather than portrait.

The Fire HD is built like a tank, there is a real feeling of solidity you just don’t get on cheap Chinese tablets (or most of Samsungs line up either it has to be said), and consequently the trade off is in the weight. The weight difference between the Nook HD and the Fire HD is only 80g but on devices weighing 3-400g, that’s quite a difference and does affect the user experience. Simply speaking, hand ache from holding it one handed sets in a lot earlier.

The user experience is pretty good though. In fact it’s very good. I had one of those jaw dropping it-did-what? moments whilst working my way through a Lovefilm trial- my first experience of xray. Basically on selected Lovefilm movies, you can touch the screen and it will bring up an overlay of the actors on screen, with the biographies from IMDB (which, along with Lovefilm, Amazon also owns). It’s not on all the films by any stretch but it is ever so clever, almost like something out of a science fiction film.

Other than that, Skype works very well, the screen, whilst not as vibrant as the Nook HD, displays books, magazines and HD movies (720p) very well, and the built in speakers are actually very good, should you wish you partake in a little sodcasting* whilst out and about. Whilst I may have said the obvious intention is for the device to be used in landscape, it works perfectly well using it in portrait to read books on the Kindle app or read magazines and so on.

Problems? The only issues I’ve had whilst using it is finding the buttons, they’re not where my fingers expect them to be and the position of the charging point means the rather nice Waterstones folio case has to be open to expose the centre positioned charge slot. Initially the battery seemed to be draining too quickly but we soon narrowed this down to some hourly polling for updates on a couple of apps we installed. Once we changed this to something more sensible, the battery life was up there with most other tablets we’ve used. 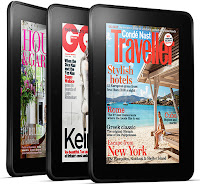 Sideloading apps that aren’t on the Amazon App Store is possible too, so you’re not just limited to what is on the store, which is nice.  A lot has been made of the restrictions that these heavily customised versions of Android have but I think that misses the point somewhat. If you consume content from Amazon, be it Kindle books, Lovefilm or MP3 purchases, it does make a lot of sense to have a device tied into that ecosystem and fortunately Amazon have come up with the hardware to match the services they provide. There is a HDMI out too, which filled me with joy- this should come in useful when we’re on holiday.

Storage isn’t expandable but at £159 for a 16gig device, that’s not the end of the world, especially in comparison to other devices at this price.

All in all then, the Kindle Fire HD was a really pleasant surprise. I wouldn’t necessarily say it’s better than either the Nook HD or the Nexus 7, because better is subjective on what exactly you want from a portable 7 inch device. If you buy into Amazon services it makes a lot of sense though, and if you want to do a bit more than just consume, the inclusion of a front facing camera (lacking from the Nook HD) is a winner. Dare I say it, I think I prefer it to the Nexus 7, which is something I never thought I’d say.

*Verb – The act of playing music through the speaker on a mobile phone, usually on public transport. Commonly practiced by young people wearing polyester, branded sportswear with dubious musical taste.
Delia was exposed to hip hop for the first time last Wednesday, when, on the 75 bus to Catford, a youth was sodcasting from the back seat.