There are no photos to accompany this post, in fact I’m not even allowed to look at the Shrine because it won’t be completely until the boys birthday in April apparently but let me tell you this much, strange things are afoot in our household. 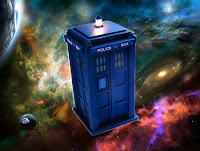 The boy is due to turn 6 in April and, with supervision, I’ve started letting him watch Doctor Who. Aside from the two Peter Cushing Doctor Who movies from the 60’s, it’s been this new fangled stuff* and not the Doctor Who I grew up with, obsessed over and felt inordinately proud of when I outscored the bloke who had it as his specialised subject on Mastermind when I was a kid.

I even have a special collectors edition pewter chess set, with 7 different kings on the white side (one for each Doctor), that’s how much of a fan I was of the show.

I am careful with what episodes I let him watch, and I vet them first. Sometimes though, things scare him that I can’t anticipate, like Davros, who I always thought looked a bit like my Nan, is particularly scary. Who’d have guessed it?

Mind you, I never tidied my room in order to erect a shrine to the show, made out of drawings, merchandise, books and pictures. I never decided to name my chicken Doctor Who Chicken, or politely ask when I would be old enough to legally change my name so I could change it to Doctor Who. Yes, I have explained that the Doctor is never referred to as Doctor Who, just the Doctor, but he’s adamant that’s what he wants to change his name to. That’s the reason the chicken is going to be called Doctor Who chicken you see, so he will be able to tell whether we’re calling him or the chicken.

It’s nice to have an interest but at what point does an interest cross over into an obsession? Anyway, I’m off to read Travels Beyond the Tardis, and marvel at the quarries that old school Doctor Who used to be filmed in.

*in Doctor Who circles it’s known as Doctor Who (2005), which was when the show came back to our screens.