This is the first official holiday we’ve had with 3 mobile kids. Last year Danger was strapped in to his pushchair the whole time. Being under 1 year of age had a lot to do with this but it did mean we were pretty speedy. This year our first break of the year over Easter down to Lyme Regis saw progress slow to a crawl as Danger took his first outside steps. He’s a strong willed little fella so no matter how wobbly his legs became, we still had a fight to get him back into his push chair- even when someone else hadn’t popped in for a sit down. 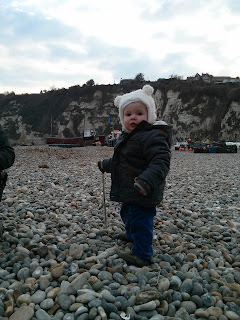 Still, he’s now the determinator of his own destiny, choosing where to go and what to pick up. So far he’s had it away with sticks, a spade, some bits of crab and a few fossils. With his bear hat, and a stick in hand, I can’t help think he looks more than a little like an Ewok but not so much that LucasArts are likely to sue.

The place that we stayed had it’s own swimming pool so Fifi and the boy spent about 2 hours a day in it, which lead to some exceedingly tired children. I’m blaming Fifi’s competitiveness on keeping up with the boy, who is 21 months older, on how utterly exhausted she’s been a lot of the time. So much so, that whilst little Wicket was on the prowl for Stormtroopers on the moon of Endor, she may have infiltrated his buggy, taken her wellies off and settled down in his cosy toes…

If you look hard you can see her snuggled down as Danger gives his best “What the damn hell is going on here?” look to camera. So it might not have been a quick break but it was certainly a milestone. 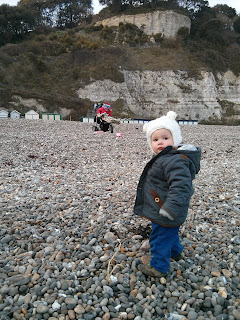 In fact the only time the telly was switched on was for Doctor Who on Saturday and by the end of Sunday the kids had even stopped asking for it to be turned on. They filled their time with a mixture of healthy outdoor activities, drawing but mostly excessive consumption of food. I blame the sea air!