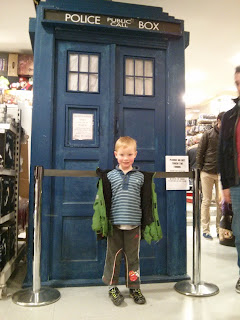 It was a birthday last week. Scrub that, it was THE Birthday (capitalised because it’s become a proper noun in our house), the boy’s 6th in fact. We were in no danger of missing it because we’ve had a daily countdown since Fifi’s in mid January. Along the way, I’ve managed to reduce him to tears a few times by pretending the TARDIS & action figures we’ve bought him were for someone else. In his heart of hearts he knew I was joking but the fear that I wasn’t was enough to completely throw him.

As I’ve mentioned before, the boy is a huge (new) Doctor Who fan, up to the point he has actually made a shrine with all his DW stuff in it. He’s not a great player with toys generally but with something like Doctor Who that’s story driven, he’s had great fun with his plastic TARDIS, Amy, Doctor, Daleks and Cybermen. All of which were on the sale shelf in Forbidden Planet, which happened to have a life size TARDIS model too.

We picked him up another couple of bits and bobs too because it’s always nice to have some variety, although his current obsession with Doctor Who brooked no other playthings. Unfortunately, one of the things I ordered on the spur of the moment didn’t arrive in time- it’s now at my desk at work, delivered during our short break to Norfolk.

So the question is, is it the toy that got away and can I justify keeping it for myself….?