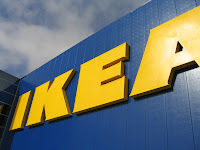 I’d like to start this post by saying the staff are IKEA Wembley/Neasden/wherever the check-in app thinks it is, are universally lovely. They’re polite, helpful and mostly know their stuff. They also smile a lot if you’re nice to them because I suspect it doesn’t happen very much.

The customers on the other hand are mostly the sort of people you could imagine frequenting Mos Eisely space port in Star Wars, which was described by a certain O. W. Kenobi as a “wretched hive of scum and villainy”. People have tried queue jumping, interrupting me when I’ve been sat at a computer with a planner and I’ve even been run over by a trolley piloted by someone who probably shouldn’t have a driving license (assuming they even did). I’ve experienced first hand how rude customers can be to the staff, one after another after another, and it depresses me. Lord knows what it does to the people that actually work there.

Even though the staff are lovely, the process of buying a kitchen and then collecting the stuff isn’t brilliant. We decided to get an IKEA kitchen as it worked out roughly a third of the price of the equivalent from either Magnet or Howdens. Even after we sourced sinks and worktops elsewhere, it was still about £2,500 cheaper and we don’t have a big kitchen by any stretch of the imagination.

In order to buy a kitchen, or even one individual kitchen unit door at IKEA, you need to:-

The last one is optional, depending on the size of your order but the built in microwave we ordered, paid for and thought we were collecting was actually out of stock.
When I ordered the bulk of the kitchen on my first visit, I had paid for the order by half 8. They actually closed the shutters and turned the external lights off between me getting my first trolley of products, loading them into the car and coming back for the next of the remaining three. I had to bang on the door before they wheeled them out.
Don’t get me wrong, the fact that you can stroll into a store and not just buy a kitchen but drive away with it, after playing a bit of IKEA box Tetris with your car, is fantastic but I can’t help think the process could be streamlined a little.
For example, you can sort of pay at the kitchen planning area. Except they don’t take gift vouchers or discount coupons, so you’ll need to go to the till if you have either. The wait for picking is shown on a screen in the collection area (if it’s working, it broke on two of the occasions I was there) and by the Bistro but not the cafe, which is much more conducive for a long wait. A store specific smartphone app that gave the same information would be awesome, as I could have buggered off to the adjacent Tesco or McDonald’s for an hour or two.
But I suppose it’s the price you pay for paying a much lower price in the end isn’t it?
*the system shows everything that hasn’t been picked. If the 3 people in front of you have all ordered the same product and their orders get picked first, if there are only 3 items in stock to start with, by the time it gets to you, you’re going to be disappointed.