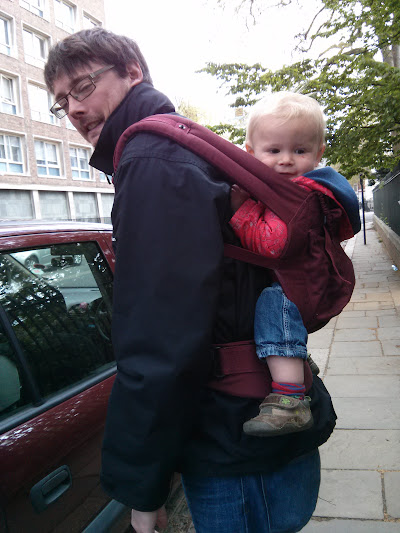 As a family we like strapping babies to us. It’s so much more convenient than pushing a cumbersome pushchair around, especially when you go up into London. We did the Ice Age exhibition at the British Museum with a buggy recently and it was a complete waking nightmare. Wifey has struggled with a lot of different slings, mostly due to post pregnancy SPD and the weight distribution, I on the other hand haven’t been able to use any of them because I’m a big bloke and aside from the actual baby rucsacks, I can’t get into any of the baby carrying devices easily. I once managed to strap Fifi to the front of me but the straps were pretty much like cheesewire and it wasn’t a nice experience all told.
By big, I mean I’m 6ft 4, have a 44 inch chest and weigh rather too much. I can often get my arms through the straps but come nowhere close to getting the straps done up. The ERGObaby Carrier fits me, and from that perspective I suppose it would fit any well endowed Mum who has trouble with the smaller baby carriers. They also do an extension set for the straps so fuller figured people can use it too. Something as simple as catering to us hefty people is such a benison. As the name suggests, the ERGObaby Carrier is pretty strong on the ergonomic side of things, both for the baby (up to 4 years old too, so not so much a baby as a mini person) and the adult carrying them. It disperses most of the baby’s weight between the hips and thighs, which helps to eliminate compression of the spine when hanging by the crotch and it also balances the baby’s weight to parents’ hips and shoulders, and alleviates physical stress for the parent apparently.
How does it work in practice then? We went to a preview screening of Epic the other day and decided to carry Danger rather than push him as we have to leave the pushchair in the lobby and it’s a bit of a faff. At almost one and a half now, Danger is more suitable for the back rather than the front since, how can I put it delicately, his feet dangle and kick at a rather unfortunate height for a man. Ahem. I needed a bit of help strapping him in initially but Wifey says this is a lot easier with a bit of practice. A lot of the time she wears it side saddle on her hip, which is apparently brilliant. But back to me, I had him on my back and could feel him snuggling against my back, which was nice, and occasionally pulling my hair, which wasn’t.
After we’d walked the mile or so from where we’d parked (Charlotte Street) to Leicester Square, I didn’t feel the tell tale pull on my shoulders or the slight ache in the small of my back that I tend to get using rucsacs generally (with or without a baby in them). I took this as a good sign and on the way back, Danger even went to sleep in the ERGObaby Carrier, a pretty good sign he was comfortable.
Fiddling with the carrier itself, the stitching looks pretty solid and the materials are high quality, something to be fair you would expect in a carrier costing the best part of £100. On the other hand, it will take kids up to four and if you’re planning a large family, I have no doubt that it will last you through several babies. It folds small when not in use, so you can let you toddler toddle about without being encumbered by an unwieldy sling while you’re out and about. It’s also machine washable, which is useful too.
All in all, this seasons best accessory is a baby, and I’m glad to finally be able to strap one to me comfortably.