In a household that has three under 6’s in, and me, with the maturity of a six year old, we spend a lot of the weekends running around in fields like loobies. It’s second nature and ameliorates the fact the kids can reach the biscuit barrel with no parental aid.

Often we tend to strap the youngest to us via a sling or rucksack but on occasion, we have to take a buggy for all the bad weather gear and excessive amounts of snacks the kids like to complain about the lack of when we don’t have them. 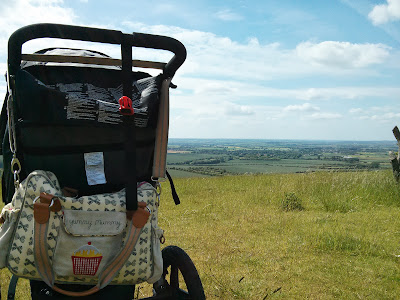 Recently we took the new addition to our buggy family, the BOB Revolution SE, out on Dunstable Downs. Danger is now fully up for an enormous amount of running about but this has the side effect of making it harder to put him in a sling because he constantly wants to get in and out, walk for a dozen paces and then sit down again. This makes a buggy a lot more practical but then introduces the problems of extreme offroading with a pushchair.

The BOB Revolution SE has a neat feature that makes it a little different from other offroad buggies. You can alter the suspension via a knob on the side to make it easier to push across muddy fields. It’s in these fields that you really begin to appreciate the large wheels and the overall lightness of the buggy. Although the frame is blessedly mostly metal, it’s tubular and lightweight, which lends itself well to lifting it over stiles or, in one extreme (with toddler removed) instance, a 6 bar fence. There were a couple of other off road positives I noted too. Firstly, there is a good level of clearance between the ground and the bottom of the shopping basket. Our Phil & Ted’s had the basket destroyed simply by constant contact with kerbs on the way up and down payments and our 360 Out & About didn’t fare any better. The BOB on the other hand has even managed to keep it’s storage mud free on some pretty horrendous hoof churned sections of track.

The wheels are quick release, so when we got back to the car, I simply popped them off and shoved them into a IKEA blue bag to keep the mud off the car. The rest of the family weren’t quite so clean but you can’t have everything.

Britax kindly gave us a BOB Revolution SE. They’re good like that.