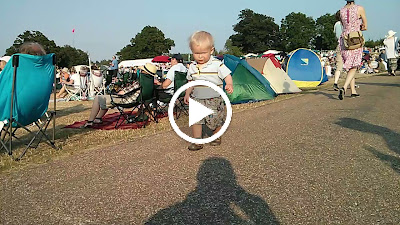 Something rather impressive has happened to little one and  half year old Danger in the last two weeks. He’s really levelled up. He’s gone from saying the odd word and nodding/shaking his head to saying whole sentences at times, and seems to be a lot more aware of what’s going on around him. I know that kids often do this sort of developmental leap but I can’t help think it has something to do with the school summer holidays and him having his big brother and sister around 24/7. The boy has been particularly good with him too, they play together and he talks to Danger all the time. Fifi is possibly feeling a little bit left out, something we’re going to look to remedy this weekend.

This morning after a handful of bellows for Mummy at half six, I got Danger out of his cot and brought him into bed with us. After a couple of minutes he got off the bed and wandered off to get something. That something turned out to be a rucsack that he wanted to put teddy into and wear like a big boy. That lead to much marching up and down with a big grin on his face. And later there were tears. When I got my shoes on to cycle to work, he got his shoes too and sat down for me to put them on. When I wouldn’t and told him he couldn’t come with me, there was sobbing. His comprehension has shot up and I can’t believe this is the same little man who wasn’t walking at the start of the year.