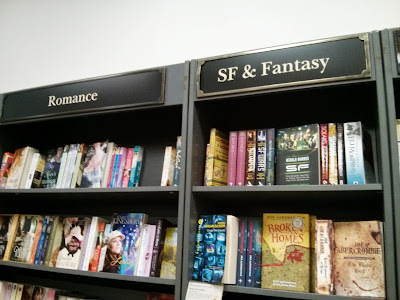 I know quite a few people, both at work and socially, who met their other half on internet dating sites. There is no longer a stigma attached to this and it’s right there isn’t. Frankly meeting someone down the pub when you’re pissed, they’re pissed and you can’t hear a thing has seemed like a bizarre route to a long term relationship to me for a very long time.

When I was still a student and exceptionally useless around the fairer sex due to various issues, including low self esteem, my university flatmates took things into their own hands and wrote a lonely hearts ad for me and placed it in the Guardian’s Soulmate’s section without telling me. The idea was to present me with a selection of normal and attractive respondents which I could then find excuses to either not date (despite the fact they wanted to date me) or find some sort of odd flaw with (she’s got enormous hands/feet/head/neck, she breathes loudly through her mouth being the normal sort of comment I’d write off famous Hollywood actresses with). However something rather unexpected happened, in that an attractive and very normal sounding girl replied to the advert. So much so, one of my flatmates decided to go out with her instead. They hadn’t told me about the ad at this point and it only came out many many years later. So my friend came down from the North of England for a date with someone who effectively had read about me and thought I sounded all right and went out for pizza with her in central London. I then briefly met up with the pair of them before I went off to drink beer with my mate (that’s how I know she was pretty). At the time it did seem a little odd my mate had gone on a blind date with someone in London but that was all pretty much in keeping with his impetuous nature and he was always doing stuff like that.

I don’t think I was even cross when I found out years later; I’ve been very lucky in the lady I ended up marrying and “what if” scenarios genuinely never cross my mind since I know I couldn’t have done better.

The internet nowadays is full of guides on how to get women to like you, and there was even a controversial Kickstarter called How to be awesome with women that was branded a rape manual by some. A steady diet of always available online porn and a life in front of a screen have genuinely convinced certain groups of boys that women are more or less a different species who need to be tricked into talking to them (if you have to) and then having sex with them. It’s all very odd, and wont really get better unless we teach our boys from an early age that girls are actually people too.

Fortunately Waterstones, the one remaining bastion of chain bookstores on our high street, appears to be seeking to remedy this. The “Dark Fantasy” (i.e. emo teen relationship books hidden behind a veneer of supernatural whimsy involving vampires and werewolves) has already been placed next to the single boy/man domain of science fiction and fantasy for sometime but the next step has been taken. Sci fi/fantasy now abides next to Romance in the Hatfield branch of Waterstones.

Good work guys, lets hope the influx of ladies into the nerds sanctury doesn’t frighten too many of them away.