I like our Wii U, and the games we have on it tend to be both fun and funny. The Wonderful 101 is no exception. It plays very much like one of those slightly bonkers Japanese cartoons you see on CiTV or one of the cable channels, probably because it’s meant to and has been developed by a crack team of Japanese game developers. 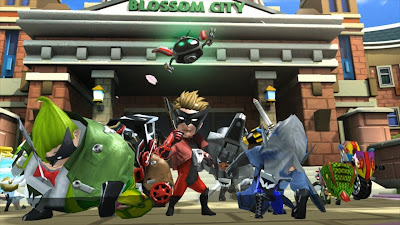 The plot sees an alien threat to the earth being countered by the Wonder 101, a group of super heroes with secret identities that are on hand to save the day. The game itself runs very much like a TV show or film, with cut scenes well integrated into the action and a very irreverent sense of humour laced through it all. For example, right near the start, Voice Over Man is telling us stuff about the Wonderful 101 as the action freezes with one of the heroes in flight holding one of those oversized swords that seem beloved of Japanese games. As the voice over continues, the chap with the sword looks around and it begins to wobble as he has trouble holding it up whilst everything else is frozen in place. Eventually as the voice over continues, he drops it and has to go and pick it up. The Wonderful 101 is full of visual humour like this and it’s a real pleasure to sit through the cut scenes rather than randomly hammer buttons to get back to the action. They’re pretty seamlessly integrated too. 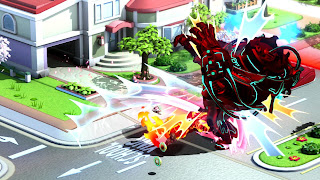 The game itself takes place in an isometric 3D world that’s colourful and packed with things you can whack. As a superhero, with a gang of superheros following you around, you can cause a lot of wanton destruction and on one or two occasions I may have gotten sidetracked from my mission by hitting cars until they exploded. The explosion effects are very good, which is just as well as you’ll see a lot of them as you progress through The Wonderful 101.

Sometimes with the number of characters on screen it can get a little confusing, especially as you get further in to the game and the number of group (called Unite in ingame parlance) moves you can carry out via the touchscreen on the gamepad grows. I have to admit, I went through a frustrating few minutes incessantly calling up the wifi settings by mistake when I was trying to make a long (super)human bridge of people. My woes aside, a few people on the internet have noted that tracing the right gesture on the touchscreen is a bit tricky in the heat of battle, so at least I’m not alone in this.

The odd irritation with gesture control aside though, there’s nothing really to fault the Wonderful 101 over. It looks beautiful and is a real showcase of what Nintendo’s under appreciated Wii U can deliver. If you have a Wii U, you have to have The Wonderful 101, it’s a simple as that.

The Wonderful 101 is rated Pegi 12 (to read more about game ratings and why you should adhere to them, click here) and is £35 on Amazon at the moment. I’m already late returning the review disc: I suppose I’ll have to buy it if I want to carry on playing…