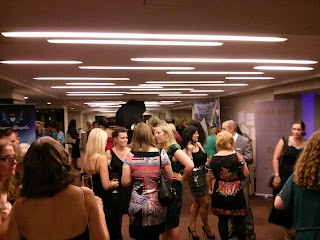 I was a little fragile Saturday morning after the tactical decision to switch to drinking red wine because nobody else was backfired enormously last night. Well it didn’t at the time but this morning, to quote Withnail directly, “My head feels like a fucked clock”. I decided to complete the punishment by taking the 4 year old to a softplay party over lunch and then going to IKEA and buying a mid height bed AND building it once I got home. I didn’t stop until about 9pm, which was pretty epic

Every year I go to the MADs or any of the Tots100 events to that matter I’m overwhelmed by how well organised and professionally they’re put together. If Sally was a man, I’d call her a Renaissance Man but she isn’t so I wont. The team did a stirling job, even if the ceiling in the lobby was a little to low for me to properly do the catching olives in my mouth trick…

Once again I was applauding someone else winning an award I was up for. I won’t say in contention for because that might be pushing it. I’ve been a finalist in 3 different Blogging Awards over the last 3 years and haven’t won any of them. There’s a lesson in there somewhere and that lesson probably involves drinking all the free wine you can manage and to hell with the hangover :)

It was nice to be able to introduce various people I know to other people I know. Since I’ve been blogging for 4 years but been attending blogging events with wifey for over 6, I know quite a lot of people. Of course that doesn’t mean I can remember anybodies name any better than normal and on a couple of occasions it all went bad with me not having the foggiest idea who the heck was talking to me like they’ve know me forever. Still, it was nice to finally meet Merry and Marylin and I did get to sit next to a bona fide award winner in Katie.

I even got chatting to Steph who turns out to be another St Albans blogger. We are indeed legion.

According to some, I may have come across rather drunk but fortunately I remember absolutely everything! Ahem.

Looking forward to next year and already plotting my world domination. I mean nomination. Well whatever.

I shall end with a couple of photos with semi amusing comments: