I a strong believer in 3M Post-It notes at work. I even occasionally regale people with the story of their invention: a weak glue looking for a use led to the genius of reusable notes. I’m full of fun trivia like that although I sometimes get it wrong to entertaining effect, like when I accused Stuart Marconie of being responsible for all those compilation music shows with talking head z list celebs:

@daddacool not me. Not even sure what shows you mean?
— Stuart Maconie (@StuartMaconie) October 8, 2013

There’s nothing like making yourself look stupid in front of a hero of yours is there? Oh well. 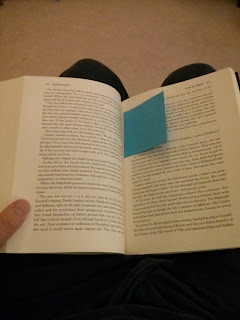 I tend to use 3M Post-It notes fairly regularly as it is, with three children rampaging round the house and constantly fiddling with my stuff, I’m left with two options when it comes to reading a book. I can either try and memorise the page I’m on or I can use a 3M Post-It note to mark my place. A standard book mark tends to last all of about 5 seconds if I’m lucky. I use a colourful one, in this instance a blue one, because  I can flick through the book and it stands out like a sore thumb.

One thing I also use the lighter colours for, typically yellows or greens, is indulging the boys love of comics with a bit of creativity. He is very particular about his drawing and will often rip up an entire sheet in a huff if he makes a mistake in one corner or something specific isn’t just right. So what I try and do is make a grid four by four on a sheet of paper with 3M Post-It notes and let him use them as the panels in his cartoon strips. That way if he makes a mistake in a particular drawing, we can just remove the “panel” without the need for much angst and ripping up the entire sheet. It’s also a great way to conserve paper because a small boy will happily fill any given space with overly large scribbles.

When 3M sent us a load of Post It notes, I quickly set to recreating something from my student days. We used a colour coded system Orange(Red)/Yellow/Green to indicate just how noxious the smell was in the downstairs toilet. Now the eldest is self sufficient in his ablutions, I thought it was high time we revived this excellent early warning system.

In reality though multi coloured 3M Post-It notes are useful for so much more than stopping your gag reflex kicking in. 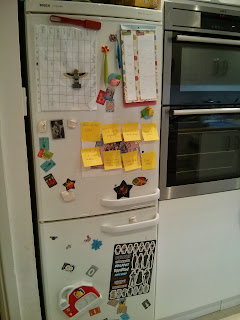 We also have what I like to think of as the fridge door of onerous tasks, which is in reality a normal fridge door adorned with “as and when tasks” on 3M Post-It notes. If we’re out of beer I’ll do one or two in the hope that we’ll get some. Sure, there is satisfaction in completing a task but there’s more satisfaction in viciously ripping the note of the fridge, screwing it up and throwing it in the general direction of the bin. Especially if one of the tasks is a passive aggressive “bins need emptying”.

Still, I’m glad we got sent loads of 3M Post-Its because I’m put them to good use in my ultimate daydream activity. I’ve always reckoned I have at least one book in me and since my first book has sort of stalled at 56,000 words, I decided to start planning the sequel. When I started the first one I was very much of the opinion that I should just write, hit a critical mass, and then go back and edit heavily. It worked to a degree but as a result I’ve ground hopelessly to a halt so have given up (for the past 5 odd years in fact). So with the sequel I’m doing things a bit differently. I have three 3M Post-It notes with Beginning, Middle and End written on them. They’re stuck to the top of the library window. Each section has four or five main points written on it. Each of these points is expanded on another 3M Post-It underneath, and so on as it trickles down to about 5 lines and 70 odd Post It notes. When inspiration hits me, I take a note off the window, sit down at my computer and type that part of the story. Since each note has a reference on it, I know exactly where each text file with the same name fits in the overall story. Fingers crossed this will actually see me finish a novel in the not too distant future!

If you run out of uses for your stockpile of 3M Post-It notes, you can always check out 3M’s Post It facebook page for inspiration too. Some of the stuff is very useful.

3M Post-it Notes are ideal for adding a splash of colour to your messages and reminders. With such a big palette of shades on offer, there’s sure to be a hue to match your message… and brighten up your desk space too!