There’s only one thing Ned likes more than playing with Duplo, and that’s hurling Duplo at other people as hard as he can. He’s a sort of modern version of Dead Eye Dick in waiting, so you had better be careful if you’re doing the vacuuming. 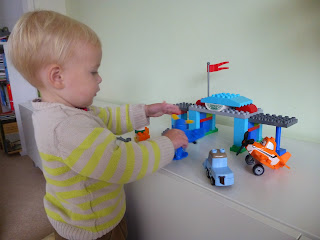 Skipper’s Flight School is one of the LEGO Duplo sets that ties in to Disney’s Planes film, set in the same universe as both of the Cars movies. It’s a film that Ned didn’t quite manage to watch at the cinema, but he has made up for it since and likes sucking the Planes branded felt tipped pens a lot.

Nevertheless Ned absolutely loved the Planes set. In the same way he loves playing with the Duplo Lightening McQueen car, he loved flying Skipper and Dusty around. You don’t get an enormous amount of bricks for your 30 quid but you do get two aeroplanes and a truck, which does allow for some serious playing. And if you want to expand the set, you can obviously bung in as much Duplo as you personally own or can take being hurled at you by a mischievous one year old. 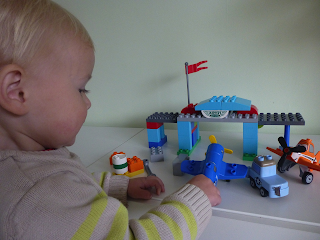 I’m a little bit torn by the whole Planes Duplo if I’m totally honest. Perhaps it’s because I wasn’t a huge fan of the film- it is basically Cars with Planes, and it has a plot that even Disney has done a thousand times before. But being based on one of Pixar’s duffer films doesn’t make the Duplo any less appealing I suppose and let’s face it, small children aren’t exactly the most discerning when it comes to films, otherwise Shrek wouldn’t have had a second sequel. So if you’ve got a little one who was wowed by Planes, the chances are they will be wowed by the Planes Duplo too and the Skipper’s Flight School set has all the key players.