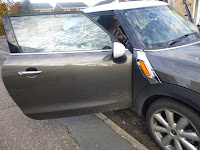 The astute among you might have noticed that those nice chaps at BMW lent us a Mini recently for a week to give it the once over and see what we thought about it. You know, I dropped a hint or two.Well after taking the family away for a long weekend in the Mini Paceman Cooper D, I had the chance to put it through it’s paces on the motorway up to ProDrive, just outside Kenilworth. The route is a mixture of motorway and some nice country lanes, which should the split personality of the Mini nicely.

In my day job when we advise clients on what sort of car is cheap to have as a company car in terms of benefit in kind, whilst still being fun to drive, we usually recommend the Mini Cooper D. As well as being fairly small engined, low on emissions and consquently relatively cheap as a company car, it also has quite a lot of poke. I’m pleased to say the same can be said about the slightly larger Paceman.

But I should take a step back first and properly introduce the Mini Paceman D. 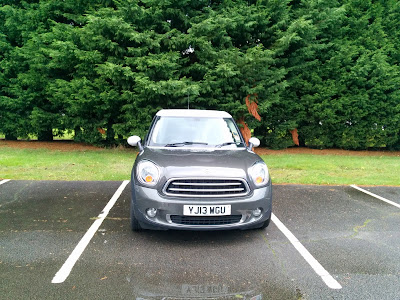 First there was the Mini One. And it was good. And lo, there was much rejoicing. Then people who needed a bigger, more pracitical car began the wailing and nashing of teeth for lo! the Mini One was not for them. In there munificence Mini decreed that the wailing and nashing of teeth could stop because the had decided to release the Mini Countryman- part SUV, part mini people carrier. Unlike the Mini One, it had 3 rear seats and a boot that a family wouldn’t weep over. Well the Paceman is a coupe based on the Countryman. This makes it bigger than the original Mini (good for people with excessive legs like me) but the coupe styling does mean the middle rear seat is lost, so it’s good for families with two kids and a reasonable amount of luggage. It’s a family car for people who don’t really want to let go of driving just for the fun of it. 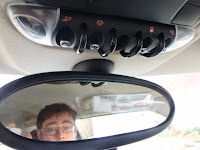 Now the history lesson is over I can get on to the car itself. A fetching shade of gun metal grey, the Paceman arrived with 4,000 miles on the clock, having being driven down from just outside Doncaster in the torrential rain. As a premium modern hatchback, it was packed with gadgets and gizmos- key-less ignition and the best stop/start system I’ve come across for starters, as well as some lovely heated seats. I’m not a huge fan of stop/start systems, based on experience of various Volvos, Citroens and a BMW 1 series I’ve driven with it but the Mini nails it. On tick over the 1.6 diesel engine is quiet enough that in traffic you wont even notice the engine has stopped and you certainly wont notice a kerfuffle when it starts up again when you put the clutch in and pop the car in gear. It works like stop/start should- you simply don’t know it’s there. If you want to turn it off, there’s one of the many stylish chrome toggle switches on the dash for you to fiddle with too. Simplicity itself.
On the motorway the Mini Paceman is in its element. A 6th gear coupled with the frugal diesel engine meant I barely saw the fuel gauge move in the 70 odd motorway miles I did. In fact the distance to fill meter stubbornly refused to drop by more than about ten miles on the whole outward motorway leg of the journey.
The instrument layout took a little bit of getting used to on the Paceman, in as much as the rev counter is dead centre in front of the steering wheel, with a small inset digital speedo, whilst the main speedo is wrapped around the circular touchscreen console where you’d see a bog standard radio in lesser cars. It’s a quirky design but not as confusing as I initially found the C4 Picasso (the speedo had been toggled with a photograph of some mountains in that, working out how to change it back wasn’t obvious).
Once I was off the motorway, progress was reasonably swift- the 0-60 is given at a shade under 11 seconds. However the Paceman Cooper D is a bit schizophrenic, because once you hit another toggle switch labelled sport, the Paceman turns into an oversized go-kart. That’s the only way I can describe the throttle response, it’s like a go-kart in as much as putting your foot down has an immediate response. It perhaps feels more immediate and quicker than the actual figures suggest because sports mode only knocks about half a second off the to 60 time, putting the Cooper D in the warm hatch rather than hot hatch category to my mind (you need the Cooper SD for sub 10 seconds if that floats your boat) but it feels enormously good fun even if it does pulverise all the good you’ve done by driving frugally on the motorway. 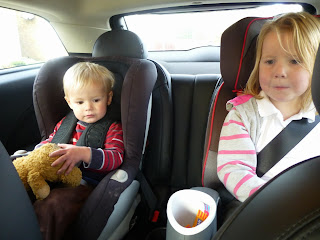 In terms of internal space, the sweeping lines of the coupe styling at the back reduce the rear headroom slightly at the sides, but as you can see it didn’t make getting the two kids installed an issue. Like most three door cars, the front seats slide forward to allow ease of access to the rear and I had no trouble getting in to strap the kids in to their car seats. Once the kids were strapped in, the cup holders in between them stopped some of the more aggressive squabbling that often occurs on longer car journeys so that too was good.

I was sad to hand the Mini Paceman D back 10 days ago and I’ve missed it in the meantime. Our normal family car is another 1.6, this time a petrol Vauxhall Zafira, and the two cars are like chalk and cheese. The Mini feels extremely well put together, quick and stylish. It’s the sort of car I imagine families in magazine features would own. The husband is perhaps an advertising exec whilst the mother has a studio in her garden where she throws pots during the day when the kids are at the Montessori nursery. At the weekend they chuck their luggage in the car and drive away to their weekend place in Dorset. It’s a fun, aspirational car, that strikes a good balance between being a family car and a fun car, because remember you can have both.
The Mini Paceman Cooper D starts at £20,210 and you can find out more here at Mini’s website.