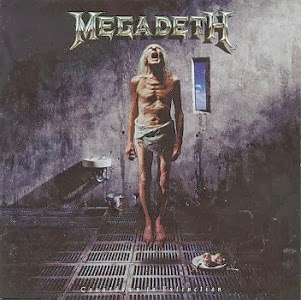 I had a fairly gentle progression into heavy metal, starting off with hairspray rock stalwarts Bon Jovi, then Def Leppard, moving on to Guns ‘n’ Roses, some of the more commercial Metallica and eventually on to Megadeth.

Countdown to Extinction is Megadeth’s answer to Metallica’s commercial self titled album. You know the one, it had Nothing Else Matters and Enter Sandman on it. Anyway, Megadeth’s main man Dave Mustaine used to be in Metallica, which is no mean feat given that both bands form half of the classic thrash quartet along with Anthrax and Slayer. Thrash is basically metal played really really fast and there is plenty of really really fast playing on Countdown to Extinction.

This is probably the album that saw Megadeth cross over into the mainstream more so than any of their previous releases. I love some of their older albums like Rust in Peace and Peace Sells but Whos Buying… but they are quite lo-fi in terms of recording and in many ways sound quite of their time. Countdown on the other hand is multi-layered and extremely polished.

Unusually Mustaine’s lyrics, if not his lyrical style ( a sort of half way house between a shout and a vocal sneer) are well worth a look- the album’s title track won the Humane Society’s Genesis Award for raising awareness for animal rights issue for example.

Interestingly a run in with a bad pair of headphones made the album unlistenable to me for a number of years. The title track, Countdown to Extinction features some fairly vigorous cymbal playing and the particular headphones I had at the time seemed to isolate this instrument to the point all I could really hear was a “T-zzzzz, T-zzzzz” of the cymbals being played. I’m pleased to say the more neutral sound-scape of the AKG K545s hasn’t replicated this problem. In fact the album was remastered in 2004 and now sounds even better. You can even hear the fretting action on some of the songs it’s that clear. If you’ve never listened to any proper heavy metal, tracks 2,7 and 4 are a great starting point and the most accessible on the album. Our eldest was accidentally born to Symphony of Destruction- the MP3 player was on shuffle in the delivery suite. We’d just had some very relaxing Zero 7 and went straight into Megadeth as he popped out. It was fitting somehow but I have subsequently (I think) been forgiven.