I have to say when it comes to pushchairs, there are probably few people more qualified outside the realms of paid for journos to assess the various merits than the lady wife and me. Over the last 7 years I think we’ve probably used around 20 buggies, travel systems and pushchairs, so we have a pretty good idea what makes a pushchair better than another one, and what simple problems often spoil something from being nigh perfect.

So when Baby Dino UK offered to lend us an Out ‘n’About Nipper 360 to have a look at for a couple of weeks, I said yes. We had the first model about 6 years ago, and it was a great rugged all terrain buggy back then but the competition has moved on since and I’m completely in love with our BOB Revolution SE at the moment. It’s our day to day pushchair of choice for young Ned and copes with pretty much any terrain we throw at it. 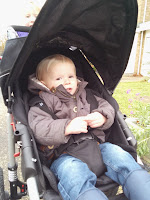 Unpacking the Nipper 360, I was again struck what good value it is (Baby Dino are selling the Out ‘n’ About Nipper 360 for £230 at the moment). For the price, the tubular metal frame is sturdy, the tires are pneumatic and the materials very strong. You could easily pay twice this for a designer buggy that wouldn’t do the job half as well.

Ned’s 2 in January and he fits the buggy perfectly. As you can see from the photo the hood is pretty huge, which in regular use is good for keeping the odd light shower off because fitting the rain cover to most buggies is always a bit of a nuisance. 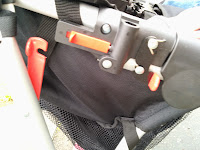 I had forgotten how compact the Nipper 360 is compared to the Bob. The Bob is almost as wide as something like a double Maclaren/Cosatto buggy and considerably longer. This has it’s pro’s and cons of course- the Bob isn’t as practical in town on a Saturday but is more stable if you’re out and about on footpaths or bridleways. Having said that the Nipper 360 is much easier to lift over stiles than the Bob for pretty much the same reasons.

The Nipper 360 has a very rugged locking mechanism to make sure the buggy can’t accidentally collapse or even not be locked properly in the open position. The result of this is it does need both hands to put up and collapse and the side clips do require a bit of strength in your hands to operate. 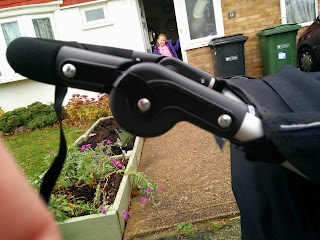 One thing that Out ‘n’ About have changed since our model 1 version is the handle. On our model, the handle is fixed and not adjustable. This means it’s very rigid and able to cope with a lot of abuse. The handle actually snapped off one pram we had when wifey tried to negotiate a curb with the underneath basket full of shopping. This wasn’t fun, as she was 3 miles from home at the time. So whilst I’m ambivilant about adjustable handles on offroaders, it was nice to see the Nipper 360 has an adjustable handle that is reinforced with a metal strip running along each side. I can imagine this strengthens the mechanism substantially, which is a really good idea.

The Out ‘n’ About Nipper 360 is a great compromise for people wanting an offroad buggy that you can still guide around the isles of Boots or Marks & Spencers without putting most of the produce on the floor. The seat still doesn’t go quite as upright as I would have liked and it’s a bit of a faff to put up and collapse but those minor points aside, it offers a rugged build and great value for money. Better still, if you purchase it from Baby Dino, they have a buy back guarantee when you no longer need it.

Baby Dino UK lent me this buggy to review. Now it’s going back. I’ve taken no recompense for writing about it, other than the warm glow of knowing that I’ve done my bit for independent British business. Cheers Baby Dino :)