Last year I decided to not do a review of the year. I’m not doing a proper one now either because bloggers reviews of the year run the risk of reading like a triumphal list of freebies- whether it’s actual material goods or holidays or experiences. That’s not what blogging is really about in my book, although I’ve had my eyes on an F-Type for a while now *cough*cough*.

Suffice to say, from a blogging perspective I’ve been happy. 24 individual posts I wrote in the year have had over 1,000 pageviews, with the top post having 63,000 views, putting it in my top ten of all time. Since I got fed up reading FB groups with people new to blogging lying outrageously about their stats- in some instances proclaiming to have 100,000+ pageviews a month after half a dozen posts and a month or two at it- I decided to put a pageview counter on my blog so anybody can see the reality of it. I’ve been happy with what it’s showing; currently on a rolling 30 basis it’s showing 101,000 pageviews. That’s with over 1,000 published posts and some top spots on Google searches mind you. 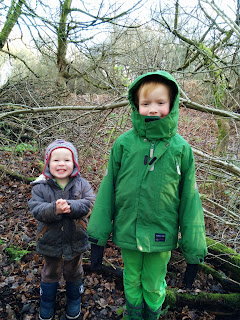 From a not blogging perspective, it’s been an interesting year. Ned is at that perfect age where he completely understands what you want him to do, is utterly mobile and wont do a single solitary thing that you ask him to do. Out of all our three children, he has developed the look of determined belligerence the earliest and for that he deserves high praise.

Ned is going to be two on New Years Day and we can’t believe that the time has gone so quickly. At the start of the year the little man couldn’t walk, now getting him into a pushchair is a struggle. It’s all about “walk, walk!” with Ned now.

His collection of phrases is very cute too. He has an idiosyncratic vocabulary for an almost two year old. It comprises of words like snack, no mate, apple, sweet, sweeties, don’t know, teddy, more teddy and hurt. Goodness knows where he picked up no mate from but he uses it in it’s proper context.

Fifi has come on in leaps and bounds. She’s taken to full time education like a duck to water. She has a genuine joy of life and is happy to take on any activity with gusto. At parents evening we were proud parents when her teacher said she is a joy to teach and the best pupil that she’s had in years of teaching. Fifi has extended this love of life to stuff outside school and is now doing occasional pony riding (it’s expensive- we can’t afford to take her every week) with 8 and 9 year olds. She’s not 5 for a couple of weeks. Her reading is good, her conversation is excellent and she is a proper little chatterbox to boot. In the summer she mastered riding her bike without stabilisers in about 20 minutes flat, which was awesome too.

The boy has had a good year too. We started the year umming and arring about whether to change schools for him. In the end we didn’t and whilst I wouldn’t say he has exactly flourished, he has come on in leaps and bounds and is now sitting comfortably in the middle of the class. He needs to get his maths up but his reading has come on a lot over Christmas- he’s now taking reading books to bed and getting through a Flat Stanley or a Roald Dahl a day, which is such a change we can hardly believe it- at the start of the year books were stupid and for babies because he was struggling with them. Particularly over Christmas the boy seems to have grown up too. He’s always had a quiet sensitive side, and he has really been looking after his little brother and making sure things are okay. For example, Fifi sat watching Scooby-Doo while Ned removed a nappy and dropped it on the sitting room carpet. Why did Ned remove his nappy? It was heavy and uncomfortable because it was full of poo. Fifi carried on watching Scooby-Doo while Ned stood there sobbing. It was only when the boy entered the room, saw the mess and ran upstairs to fetch his mummy (thank God I was in the shower at the time!!!) that the powers that be were alerted.

Wifey embarked on her epic tidyathon, and I must say that it’s starting to show fruit. I’ve only been hit on the head from something falling out of a cupboard once over the festive break, which is a massive improvement on normal. We have what is effectively a new room now. Earlier in the year we had our kitchen refitted. It was the original from when the house was built in the late 60’s and really starting to show it’s age. Some of the electric was jerry-rigged too- surface mounted wall sockets with the cable hidden under iffy tiling and other sockets with DO NOT USE writ big in felt tip pen. We thought almost 7 years of using the DO NOT USE plug socket was probably enough and had the entire room rewired as well as the new kitchen, ceiling and french doors put in. In fact it took so long that by the end of it the kids were crying out for home cooked food and an end to takeaways. For the novelty of that alone, I’ll remember 2013.

I’m glad 2013 had a hot summer because the last one we had a few years ago saw us return home after only 2 days of our summer holiday as both kids had chicken pox. This was the first proper shorts and tee shirt weather Fifi remembered. That, coupled with the snow earlier in the year meant it was a best of both worlds weather wise for us.

I’m looking forward to 2014 with genuine enthusiasm for once. We’re starting the year with a tidy house, and a tidy house leads to a clear mind free from clutter and (more or less) worry.