Speaker docks are normally fairly one trick ponies. You either plug your device into them or Bluetooth a connection and then play some music. You can get portable devices or mains powered devices and they come in all sorts of shapes and colours. 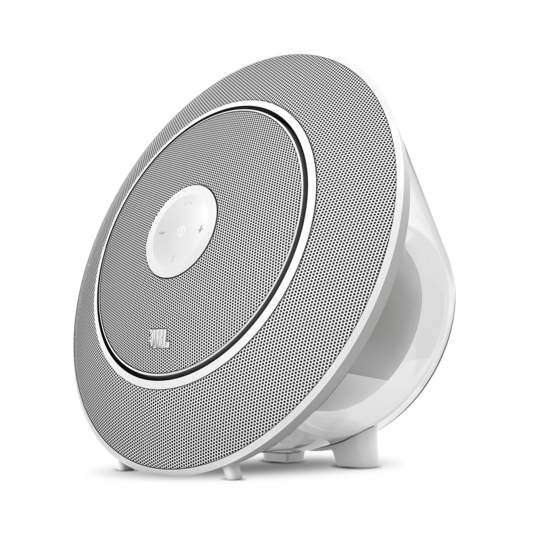 JBL have attempted to try something a bit different with the JBL Voyager. It’s circular, mains powered, has Bluetooth and a 3.5mm input but also has a rather clever pop out portable disk that functions independently of the main unit and can go anywhere with you. Clever eh?

The clever continues with the overall design. I really like the way it looks- the mixture of metallic, white and clear gives it a very clean look, especially when it’s combined with the circular look. It’s a 2.1 device- stereo speakers and a built in sub-woofer, which is a bit counter-intuitive given that it’s circular.

I’m a fan of 70’s rock music, back in the day they knew how to do stereo separation properly. There was also none of this loudness nonsense going on when 70’s rock was initially digitally remastered, so you get a proper recording the way it should sound. With that in mind, I decided to give streaming some FLAC (uncompressed) tracks a go via Bluetooth.

Pairing my phone (Nexus 5 on Kitkat) with the JBL Voyager was painless. Browsing my network shares via ES Explorer and picking what to listen to was equally good. I have to admit to a near brown trouser moment when I hit play on The Who’s Baba O’Reilly though, as I hadn’t quite anticipated how loud the JBL Voyager actually went. Once I’d checked I’d not woken the whole house up, I tried again with a slightly lower volume level. The manual says it outputs 7 watts per channel. What that means in total output I don’t know but it goes plenty loud enough without distorting, that’s for sure. 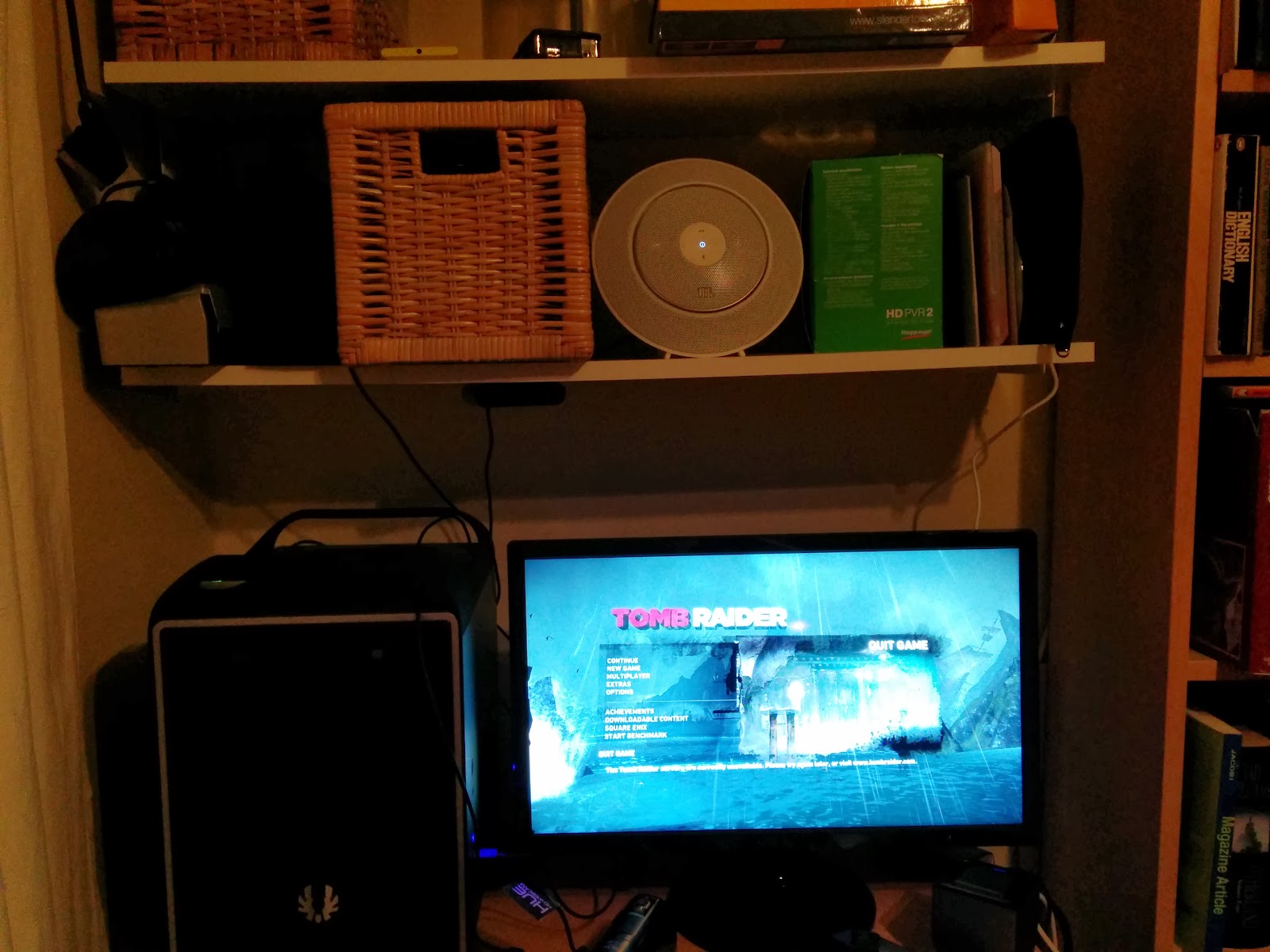 As a secondary experiment, I decided to utilise the AUX input and hook it up to my computer. Currently to save on plug sockets I use my Asus monitors built in speakers for the majority of my PC work. They’re fine for the odd bit of gaming but I tend to use my headphones for listening to music when I’m working at my computer. As you can see from the photo, I sited the Voyager on a shelf just above my PC and monitor (like the Bitfenix case eh?), so the cabling is a little untidy. I was interested to see how well it anchored sound to the screen and how effectively the stereo separation worked whilst doing a little bit of gaming. 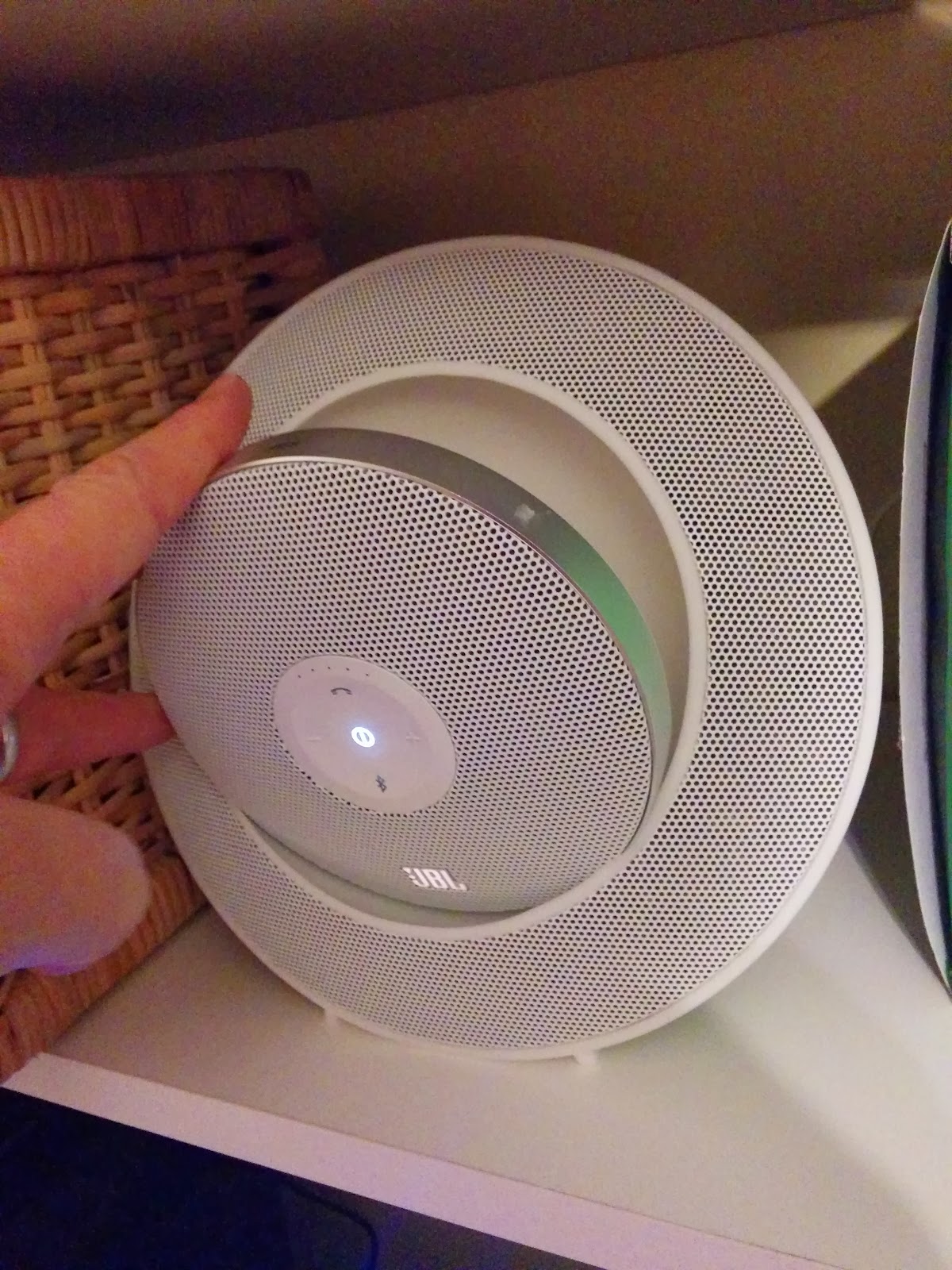 So after I’d plugged it in via the speaker port on my PC and the AUX socket secreted at the back of the Voyager, I fired up Steam and loaded Tomb Raider. Tomb Raider has a lot of ambient sound effects, from wind and rain, to echoes as you go through tunnels, so I thought it would be a good test of the range the JBL Voyager can deal with. It took a bit of tweaking to get the volume set satisfactorily and I must admit I was slightly surprised to find out the box didn’t contain a 3.5mm to 3.5mm cable- it had pretty much everything else, including two different power cords- but once I had it set up, I was pretty impressed with the effect. Considering the sub-optimal positioning of the speaker- above the monitor and my head, the stereo separation and anchoring of speech to the screen were most impressive. The sound-scape conjured up was involving and full of subtly, which again surprised me since it came from what is effectively a BT speaker dock. 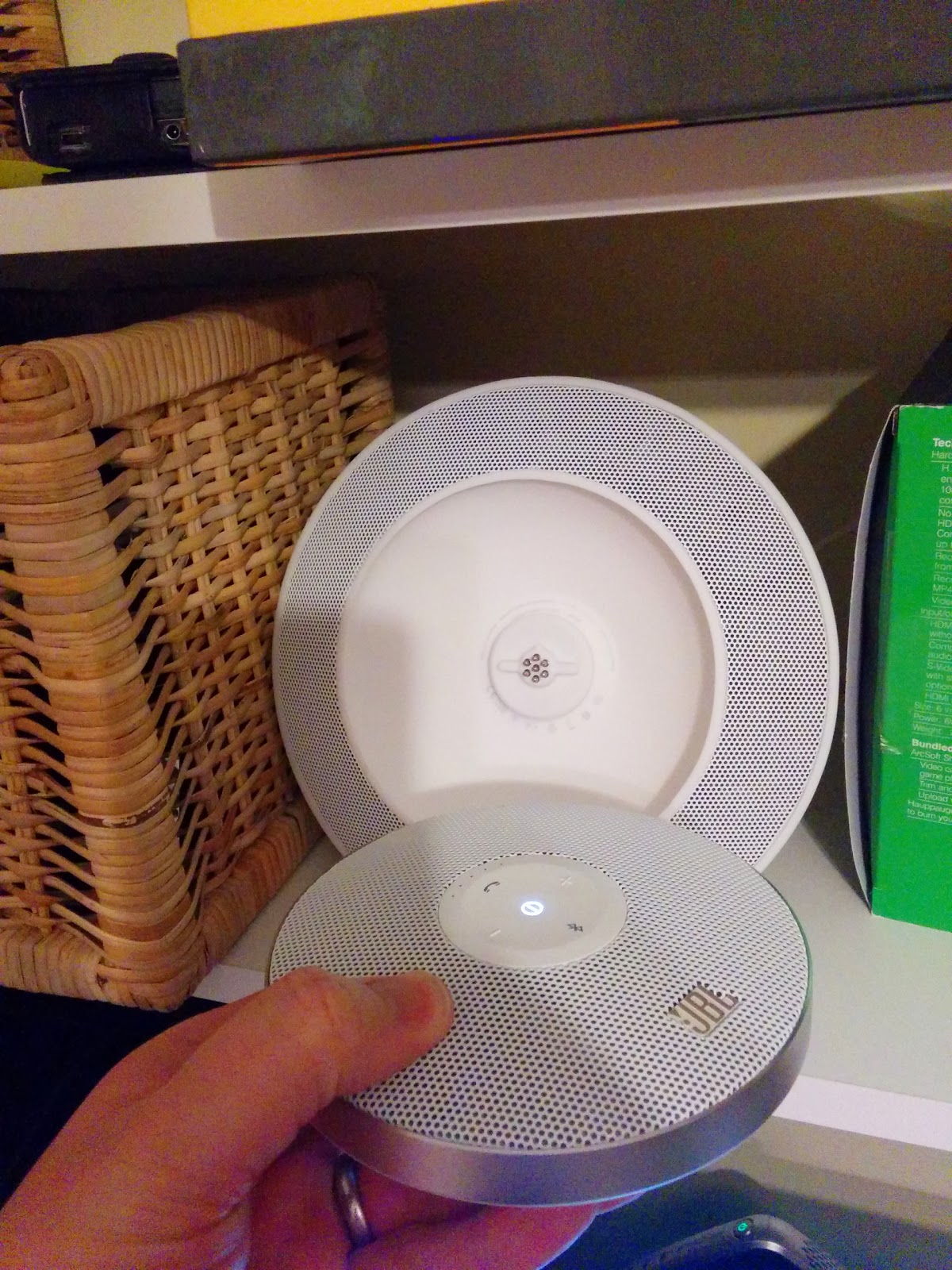 Now for the clever bit, the detachable portable speaker. Basically the base unit is the sub-woofer, and the disc contains the speakers. It’s held in with magnets and comes out fairly easily. I would have liked to have seen a carry pouch in the box for taking it out and about, because given how smart the unit and base unit looks, it would be a shame to scuff it in my manbag.

In terms of using the disc, it has a pretty good sound for a portable BT speaker. The battery life isn’t bad either but the clever trick is you can pop it back into the dock when you’ve finished pottering around the house (ie you’ve taken it to the bog with you) and it doesn’t stop but carries on playing with the sub-woofer kicking in. Nice. 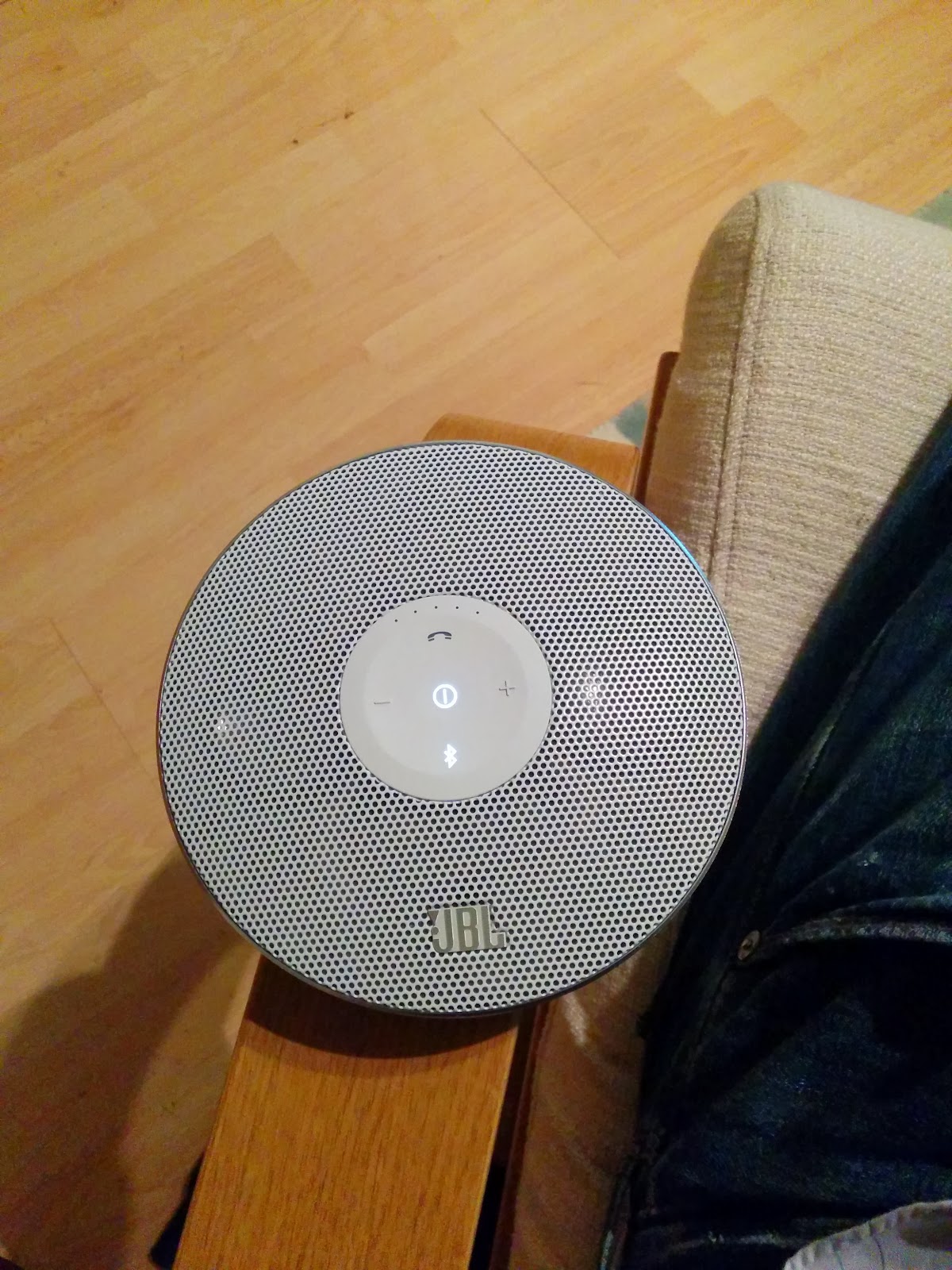 So this brings us down to the price. £229. This is about the same as you could expect to spend on a SONOS Play:3 which is a fair bit cleverer in terms of using wifi and being a proper home music system. But, and it’s a big but, the SONOS does have it’s limitations in terms of portability, requiring it’s own special app and obviously lacking bluetooth for simple phone pairing and music play. The Play:3 also doesn’t have an AUX in, you have to pay a lot more for the Play:5 to get that functionality. Crucially though, the JBL Voyager sounds every bit as good as the Play:3. And that’s something I didn’t expect to be saying. The fact that you could easily pay £70-£150 for a portable wireless speaker of the quality of the disc to my mind probably tips the balance in favour of the JBL Voyager when it comes to value for money. I like my SONOS (we’ve got 2 Play:3’s and a Play:1, and I’m lusting after a Play:5) but I have to say I was genuinely surprised at how well the sound compared on the Voyager, especially given I was expecting a compromise in sound given the detachable speaker disc.

So far I’ve built up 20 or so hours of use on the JBL Voyager, enough time to warm the thing up properly and get an honest feel for how it sounds.

You can read my video review of the JBL Voyager on daddacool.tv

This is a review unit I’ve been lent, it’s going back in a few days. The opinions here are mine and I’ve not been reimbursed to share them. I’m good like that.