After failing last weeks challenge somewhat, we were keen to make amends this week and given it was half term, this gave us plenty of opportunity to give our two challenges for the week a go. The first of them, the figure skating, is a rhythm game, the second, the snowboarding giant slalom, is a racing game. If you’re not clued up with what a rhythm game is, you basically have to follow on screen prompts with your controller in time with the music (or the rhythm). I shouldn’t need to explain the concept of a racing game to anyone but if you don’t get it, there’s plenty of other stuff on the internet; I’d suggest you give up on reading this, it’s not for you. 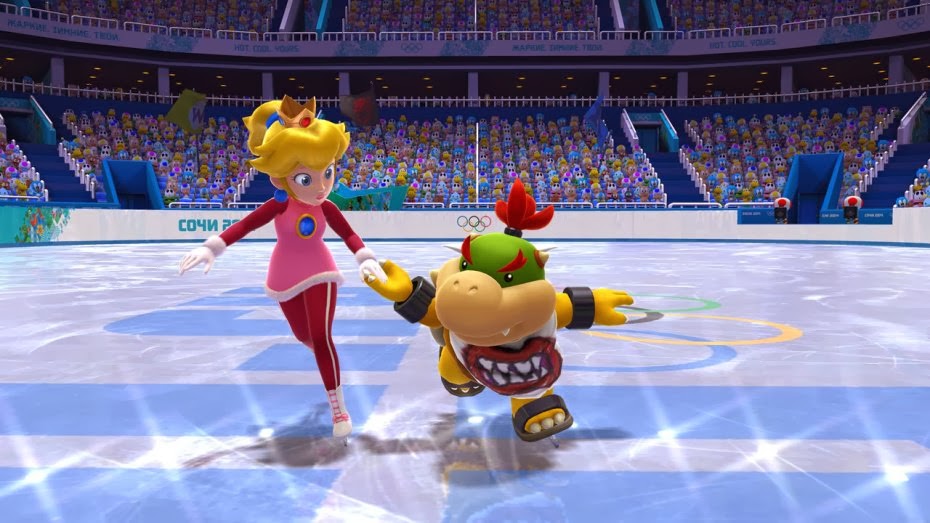 We were given a points score to beat on the figure skating that on the face of it seemed easy but in the end took the kids some considerable practice. All of the individual moves in themselves are intrinsically difficult but managing to do them all (more than once) in a perfect routine proved a tricksy enterprise. Whilst we did try the doubles, we quickly realised that getting two people to do it perfectly was a step too far and would probably lead to one of the kids murdering the other when they fluffed a spin or something. After an enormous amount of time, which to be fair was partially spent distracting ourselves on the curling, because EVERYONE LOVES CURLING, we managed to beat the challenge points total of 78.5: 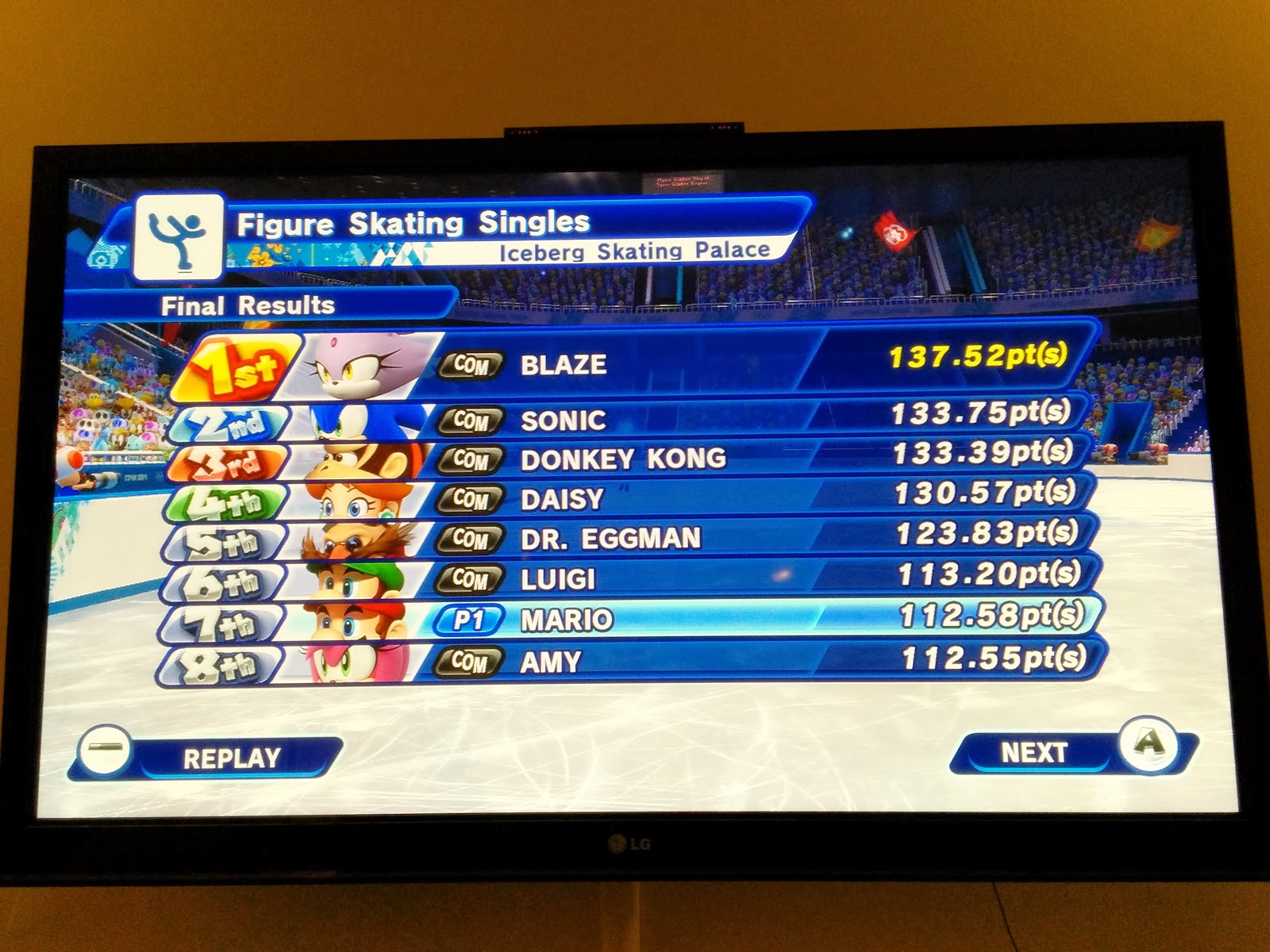 Beat it? We thrashed it with a whopping 112.58. Never before has a curly haired plumber spun so well.
The super giant slalom on the other hand was super giant fun. The controllers tilt function is used to control your character as they hurtle down the slope on a snowboard. The only issue we had with the challenge was not picking up penalty points on the way down by missing the gates. We posted a pretty good time here: 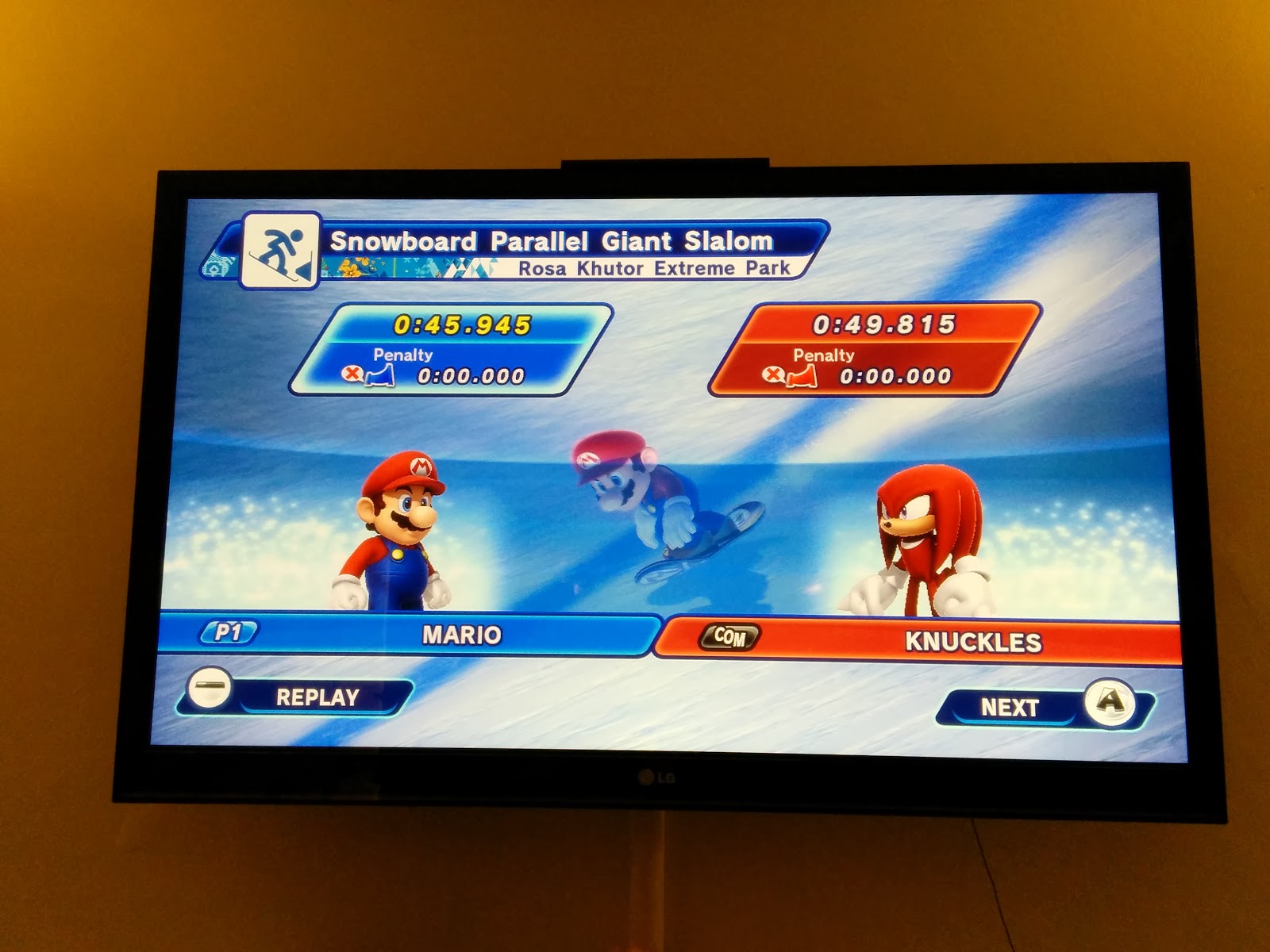 Yes that’s right, we got a 45.945, a full 3 seconds quicker than the target time. They was an enormous amount of posing when we managed this.

And that’s what sums Mario & Sonic at the Winter Olympic Games Sochi 2014 up so well, it’s great competing against a record time. Once we’d played it a bit (a lot), we had our own record times that we were aiming against and individual Mii profiles for each of us to show who had the best time. I had to naturally take it a bit easy so I didn’t utterly pulverise the kids times and demotivate them from trying harder but they will need to practice to get as ace as me at video games.

Mario & Sonic at the Winter Olympic Games Sochi 2014 is available to buy now and it worth investing in if you have a Wii U. Yes, the Sochi games might be over but the weather doesn’t look like it’s getting better any time soon and this is a great way to keep your family occupied on a wet weekend.