The kids have been big fans of Scooby Doo for a while (Mystery Incorporated is brilliant mind you) and recently wanted to watch the live action films. The first one is okay but not brilliant, the second is a bit mediocre but Matthew Lillard is still awesome as Shaggy and Velma is surprisingly cute but dear LORD the third and fourth live action (TV) movies are an abomination.

You only have to look at the respective casts to know this without watching anything: 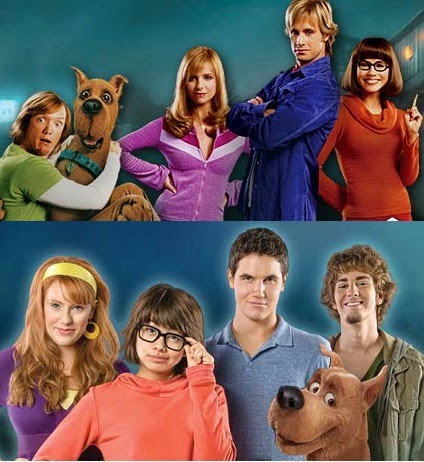 It’s like the cast has been inspired by the original live action film. A bit. And then not at all with Freddie. And of course it gets worse. I can’t begin to talk about the “plot” of either the third of fourth film without feeling physically ill.

Of course the original Scooby Doo we all watched in our youth was distinctly low rent, cheap & cheerful like most of the Hannah Barbara stable, but if you were watching the original 1969 Scooby Doo Where Are You? and avoid the 1979 Scooby Doo and Scrappy Doo show (God, I still feel hatred for Scrappy Doo), it had a certain charm and is watchable. The latter two live action films are bereft of even low rent charm- they’re just horrendously low rent.

And the kids seem to love them. Not as much as the first two films, which even as I write this are attaining Star Wars like levels of awesomeness in my mind as I think more and more about the two TV movies but they still love them.

And that is basically why you can’t let your children choose their own friends. Maybe help them devise a questionnaire or some other aid to remove their personal judgement from the equation because if you rely on their judgement, you’re stuffed and you’ll end up with the metaphorical equivalent of Kate Melton as Daphne and Nick Palatas as Shaggy.