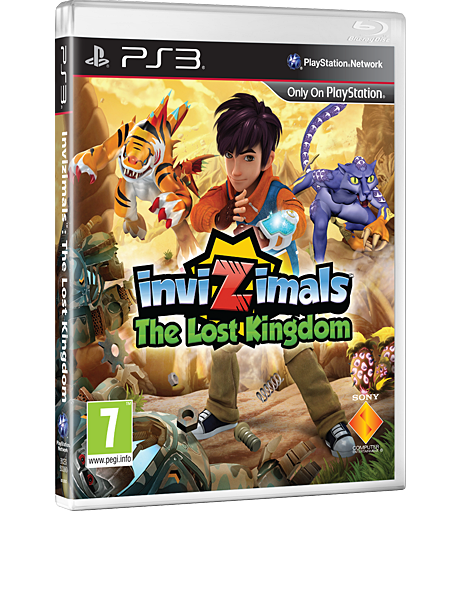 We were invited the launch of two new Invizimals titles on Saturday by those nice chaps at Sony, a 3D platformer on the PS3 called The Lost Kingdom and a PS Vita augmented reality battling/collection game called The Alliance.

I’ll write up my Vita experiences separately but for the meantime, we’ve spent hours playing the PS3 game since. The Lost Kingdom is a 3D platform game in which you take control of Hiro, a young explorer who discovers a magical portal that teleports you to the Lost Kingdom – a land under attack from a cruel, rampaging robot army. Transform into 16 of the most popular Invizimals, using their unique powers and abilities to solve puzzles and battle against your enemies. What this translates into is a good looking game that lets you pull off some really great moves even if you’re 7 and not the most dexterous kid in the world.

Having recently played a bit of Pac Man and the Ghostly Adventures and become fed up with falling to our death all the time, it’s nice to play a platformer that is a bit more forgiving. Unlike the Skylanders games where you can’t really plunge to your death, you still can in Invizimals: The Lost Kingdom but it happens fairly infrequently and is almost always your fault and not the camera angle or the game cheating you.

On the ways interaction has developed in video games in recent years has been the introduction of what is referred to as the Quick Time Event (or QTE). These are usually used to enhance the cinematic experience- for example you might be asked to press X at a specific time to dive dramatically out of the way of an approaching car in a chase cut scene or something similar. Invizimals uses this sort of idea to let littler kids do really cool things in the game without having to be a black belt on the PS3. For example, the first Invizimal you start out controlling, Ocelotl, has a nifty rope line thing he shoots out to floating platforms and swings up dramatically on. Kids don’t have to specially line up the character or remember a complex button press to get Ocelotl to swing up, all they have to do is position him in a glowing area and press the triangle button. The same goes for the excellently cinematic wall climbing skill, simply press the triangle button in the right place. In other words, triangle is your friend.

As you progress through the game, you get access to a larger number of Invizimals, all of whom have their own special skill set that might be more appropriate for a given task. Added to this, there is some interaction with the Vita game too. I’m not going to go too much into this until I can try it out myself but it looks good fun.

As far as 3D adventure games go, this one has both the eyecandy and the accessibility to make it a great game for kids. I had to drag our eldest up to bed last night and he’s had some rather heated discussions with his sister over the best approach to take to certain puzzles that have almost resulted in punch ups. Good fun then, and they really need to get the cartoon released over here as soon as possible.

Invizimals: The Lost Kingdom is out on 28 March on PS3.