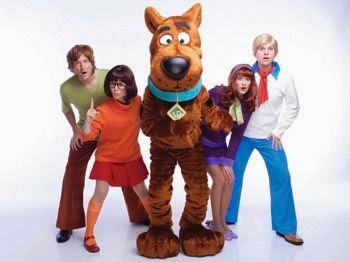 For about the last year or so Scooby-Doo has been the children’s all time favourite programme. Even those ill advised episodes with the enormously irritating Scrappy Doo in seem to gain universal praise from the little ones, which just goes to prove they’re too young to make discerning decisions. To say they’d watch it night and day for an entire weekend and more is no understatement. They absolutely love it. Interestingly each child has adopted one of the characters as their own and they are all different, so they can recreate their favourite episodes at home. We’ve even acquired Scooby-Doo toys to fulfil my lifelong the children’s fantasy

I have to admit I’ve been a massive fan myself since I was a nipper. The 1980’s the ghostly interloper always turned out to be old man Withers who had an unaccountably brilliant disguise that could have made him his fortune in film costume design. I’ve been subjected to virtually every episode ever produced and the motion pictures I am beginning to rediscover my love for all things Scooby. So when we heard that there was a new Scooby-Doo stage show called The Mystery of the Pyramid; Scooby-Doo Live on Stage, I started at looking at the options of where to take them to see it. Unfortunately the St Albans leg of the national tour has already sold out (in fact it’s happening this week!)

The show itself looks really impressive, have a look at the video:

In one of those freak coincidences the Basingstoke show actually happens across a weekend and we have been really keen to spend a weekend in Hampshire ever since we spent a weekend down there to go to a fantastic night-time opening of Marwell Zoo. In fact we’ve even been offered a weekend down there by the Hampshire tourist board that I never quite managed to get back to them about. If we do an overnighter, it will be pretty much a no brainer to go to Marwell Zoo as well as going to the Scooby-Doo live show in Basingstoke. The last time we went to Marwell Zoo, we had such a great day out, we were sad to leave.

In terms of hotels, there are loads to pick from and I’m currently considering the Holiday Inn Basingstoke as we have stayed with Holiday Inn before and they are usually very good. If the Basingstoke hotel is fully booked then my next option is the Holiday Inn Guildford which is only 38 minutes or so away from Basingstoke and has the bonus of being the haunt of more than a few of my old university chums.

If you’ve got a suggestion of where we could visit on our trip to Hampshire, let me know via the comments

Disclaimer: A featured post, in order to pay for the trip!