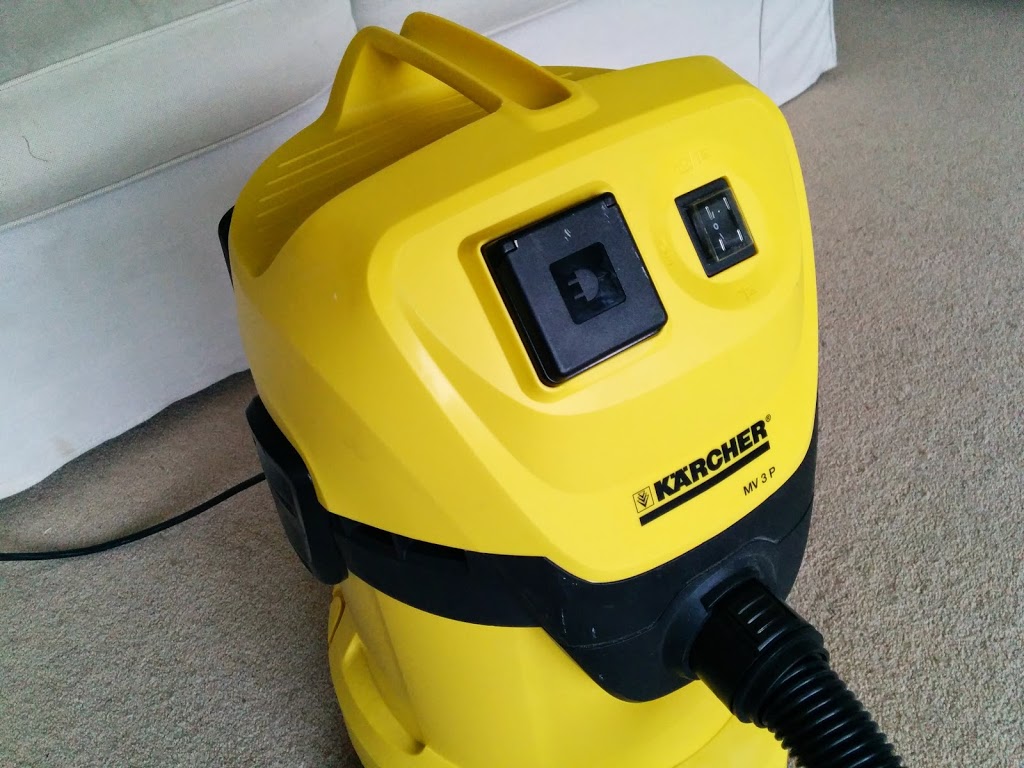 I’ve read descriptions that call the Kärcher MV3 P a wet and dry multi purpose DIY cleaner, and whilst it definitely flexes it’s muscles in a DIY environment, it really works exceptionally well as a general family vacuum for a family like us with three children.

None of the individual components shout “premium quality” insofar as they’re not made of glossy shiny plastic, and that is perhaps something you wouldn’t expect from a device that retails for £119.99 but it also completely misses the point. The hose is lightweight but is ribbed and flexible and doesn’t kink whatsoever. The tubes simply pushes together without any clips to attach to the hose, and the head is about as low tech as you can get. All this means the Kärcher MV3 P is virtually indestructible and consequently brilliant. There are no fiddly little bits that can break, nothing that can get snagged and crack and very little as a result that can go wrong. Family proof? So far after 6 months of use it certain appears to be so. 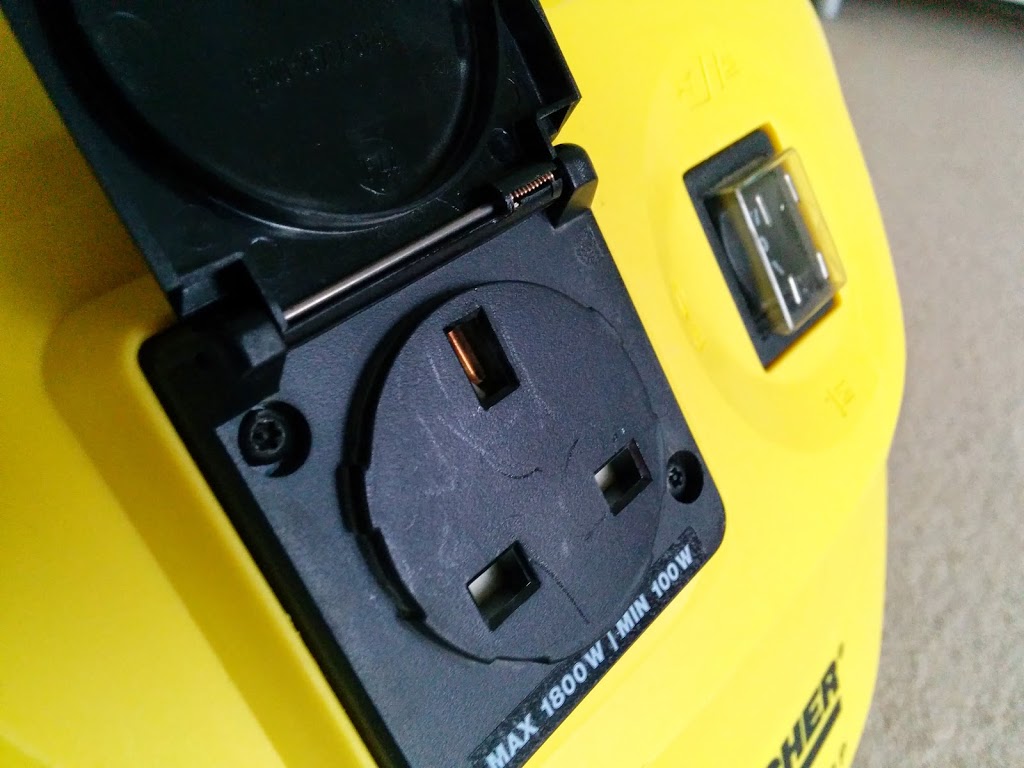 In terms of DIY chops, the Kärcher MV3 P has some serious features. You may have noticed the plug socket cover on the front from the top picture. Sure enough, underneath is a three pin plug hole. The waterproof on/off button has a third setting that lets you set the Kärcher MV3 P to be operated by the attached power tool. For example, last week I put up some hooks for hanging our airer on when it wasn’t in use. Rather than getting an extension cable for the drill, I simply used the 4m cable on the cleaner, plugged my drill into the front socket, held my drill in my right hand (8mm bit in it, if you’re interested) and the vacuum nozzle in the other. When I squeezed the drill on, this automatically turned the Kärcher MV3 P on, and as I drilled I was able to suck the brick dust up before it even hit the floor. Magic. 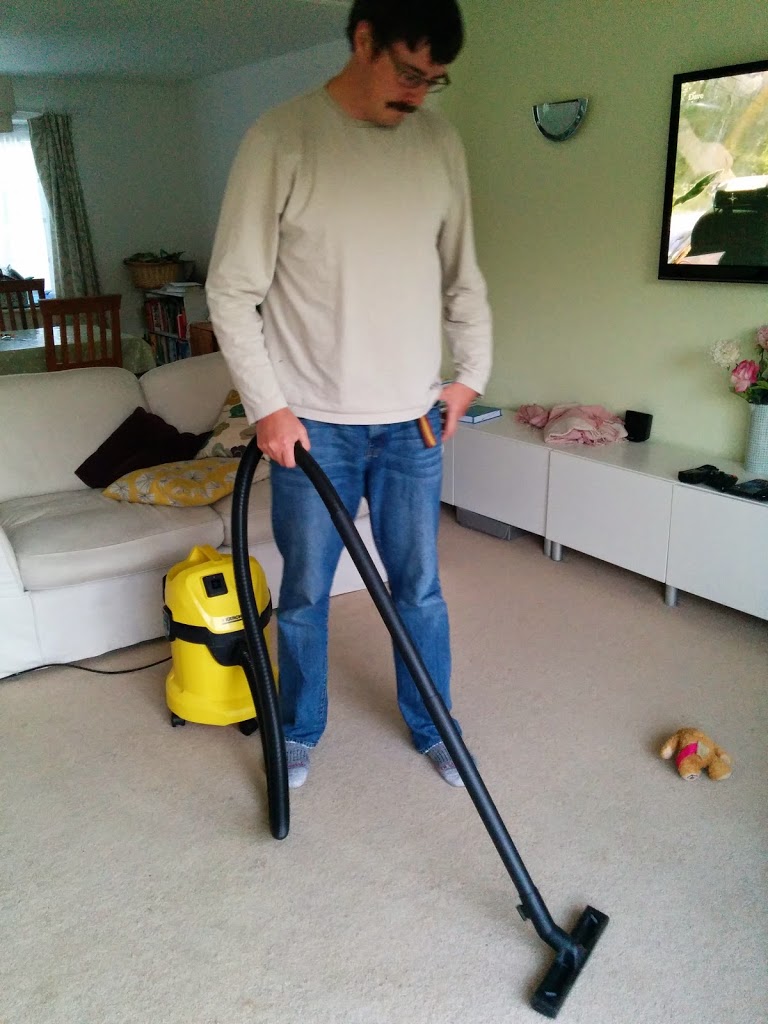 The suction is the best we’ve had from any of the vacuums we’ve owned over the last 10 years. It’s driven by a 1,000W motor which apparently gives the equivalent power output of a 1,400W vacuum. I’m not entirely sure why it gives more suction than it’s actually output but to be honest in practice it just sucks stuff up. A lot of stuff. It works as well sucking cobwebs down from the ceiling as taking up popcorn kernels off the floor. We’ve not had to use the blow function (accessible via the outlet hole which you can connect the hose to) but it stands to reason the blow will be equally ferocious.

The wet and dry functionality comes in handy after we’ve carpet shampooed the sitting room- although the big and heavy upright carpet shampooer we have does suck a lot of water up, it still leaves the carpet pretty sodden and this is where the Kärcher MV3 P comes into it’s own, taken up the majority of the remaining water. 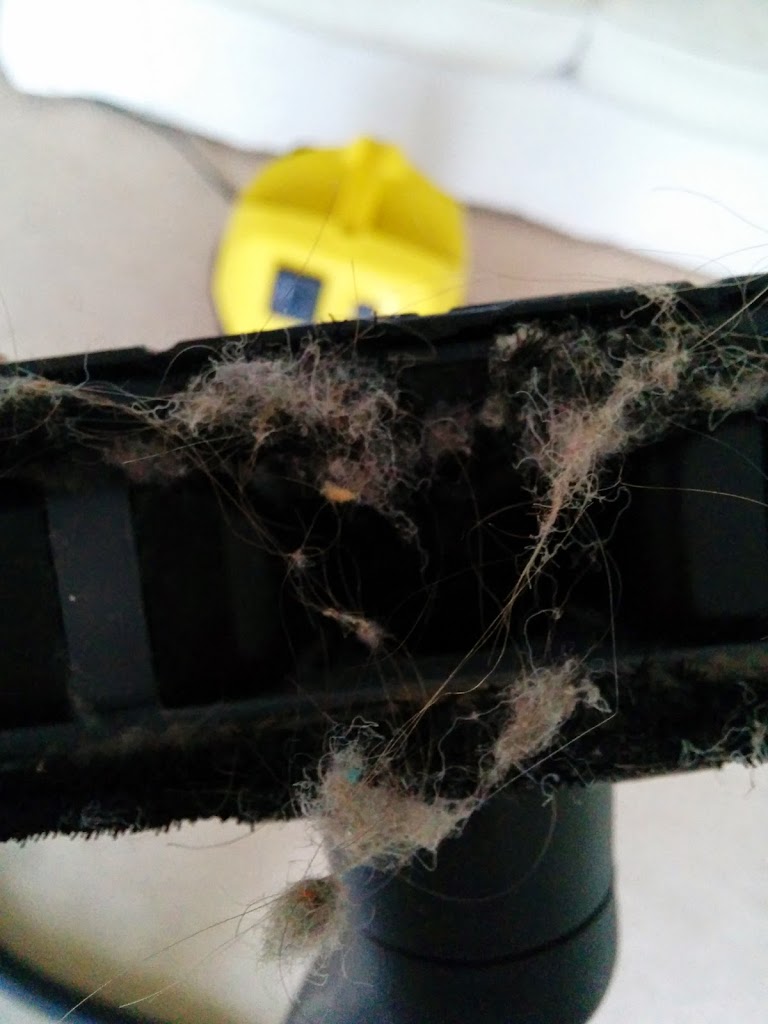 Problems? Well, after 6 months of use there is precious little to complain about. If I were to be completely picky, the cable could do with being a little bit longer as 4m isn’t quite long enough to run from one end of the open plan dining room/sitting room to the other. The device is lightweight, and consequently top heavy as the motor is in the top third of the unit, which can make it a little prone to failing over. Finally the sheer power of the suction can actually clog up the end of the vacuum head, which reduces the suck considerably. When this happens, all you have to do is pull a handful of fluff (usually bound together with girl hair) out and it’s fine again.

These issues are really quite minor though and I can emphasise how impressed we have both been with the Kärcher MV3 P. It simply gets on with the task in hand with minimum fuss and maximum power. Considering we’ve spent two to three times the RRP of the Kärcher MV3 P on premium brands in the past, I can’t help but think we’ve wasted money because this is every bit as good and about ten times more family proof than anything else we’ve had.

Kärcher, it’s time to rebrand the MV3 P as the ultimate family orientated vacuum cleaner because it is pretty hard to beat at any price.