When I was little and I wanted to be a spy, I had to rely on this book: 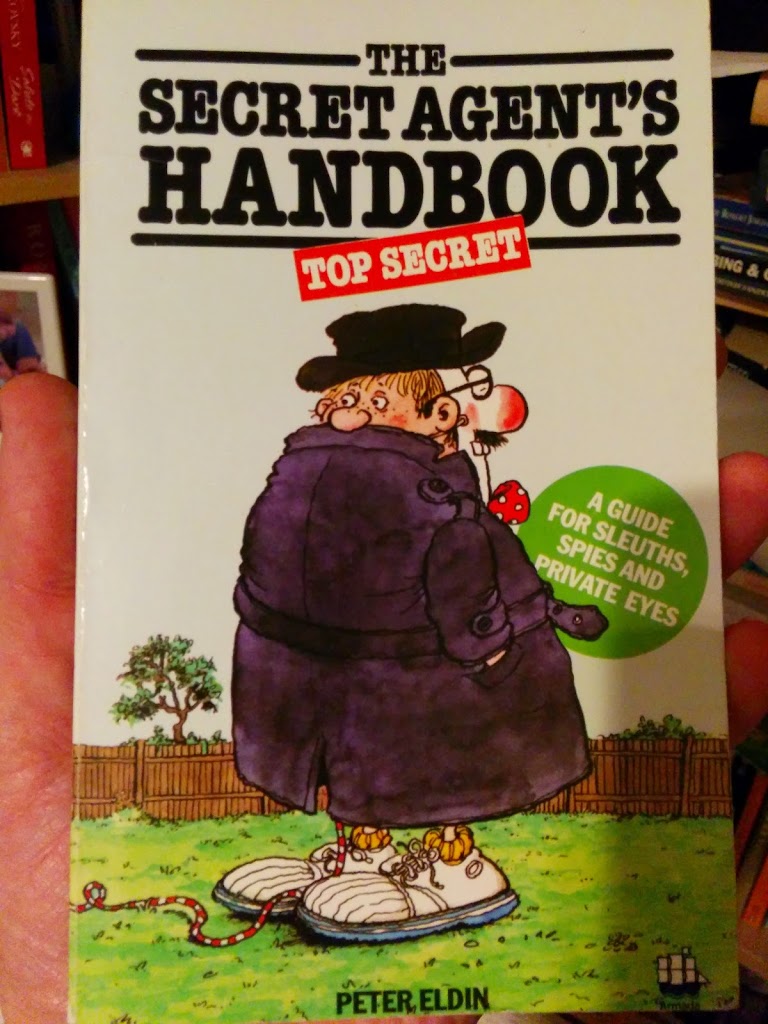 Whilst the Secret Agents Handbook is undoubtedly a classic that no aspiring spy should do without, there are now plenty more gizmos and gadgets you can utilize in your daily life as a top secret agent. I suspect Spy Net and it’s contemporaries are going to be in for a bumper Christmas, and so it’s a good time to have a look at some of their stuff 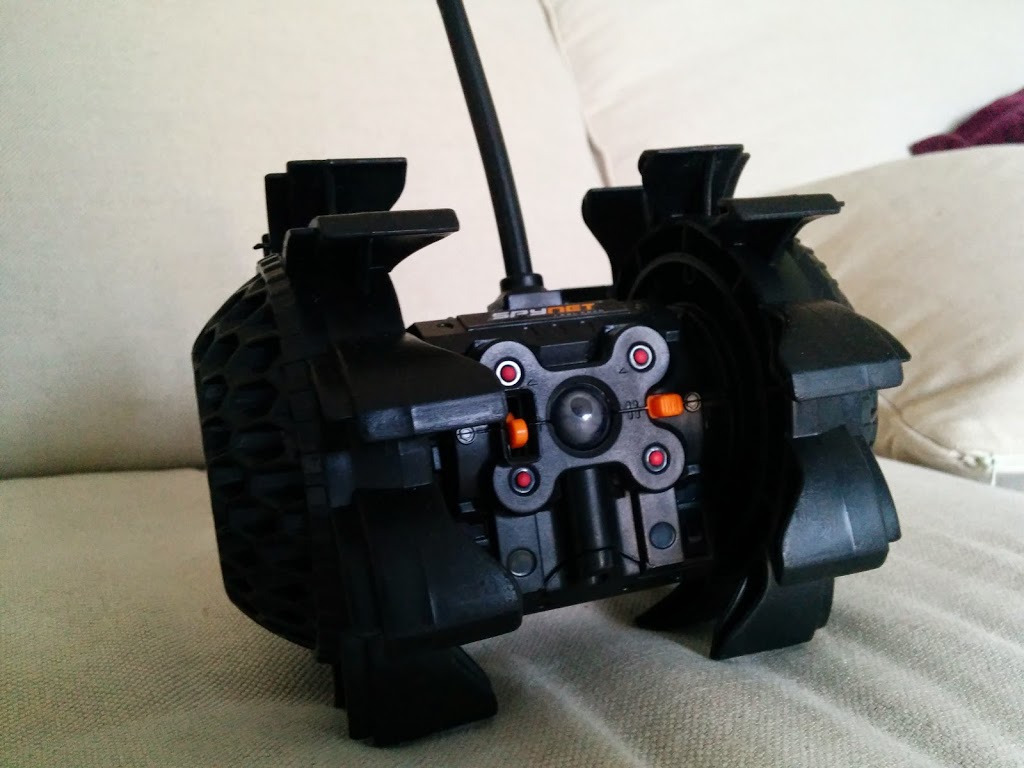 Spy Net kindly sent us (the boy) their Throw Bot to review. What was even better was the
didn’t do a Mission: Impossible and self destruct in ten seconds. The Throw Bot, which has apparently featured in the current series of 24 on Sky 1, is a rugged remote control vehicle that by way of an on-board camera can be used to peek in on what people are up to in another room.
be seen again, it certainly seems pretty robust. Ours has had a couple of weeks of extreme (mis)use from the boy and has only developed a distinctly un-spy-like squeak as a result, which is pretty impressive. Usually by this point I’ve had to have the tool box out to fix something that is more or less irreparably broken,

The blurb says you can lob it over any walls that obscure your view to see what’s going on and whilst I wouldn’t advocate chucking it into the neighbours garden, never to will be big hits this Christmas in households with little kids this year and this suspicion is only reinforced by the latest Argos catalogue  giving over a whole page to spy gadgets.

Of course before you do any motoring or spying for that matter, you’ll need to locate 8 AA batteries- four for the remote control and 4 for the unit itself. The batteries in the remote last considerably longer than those in the unit- we’re on our third set of AAs in the Throw Bot whilst the remote is still on it’s first. Part of this is a legacy of the boy not turning the Throw Bot off but it also does seem to chew through batteries at a fair old rate. 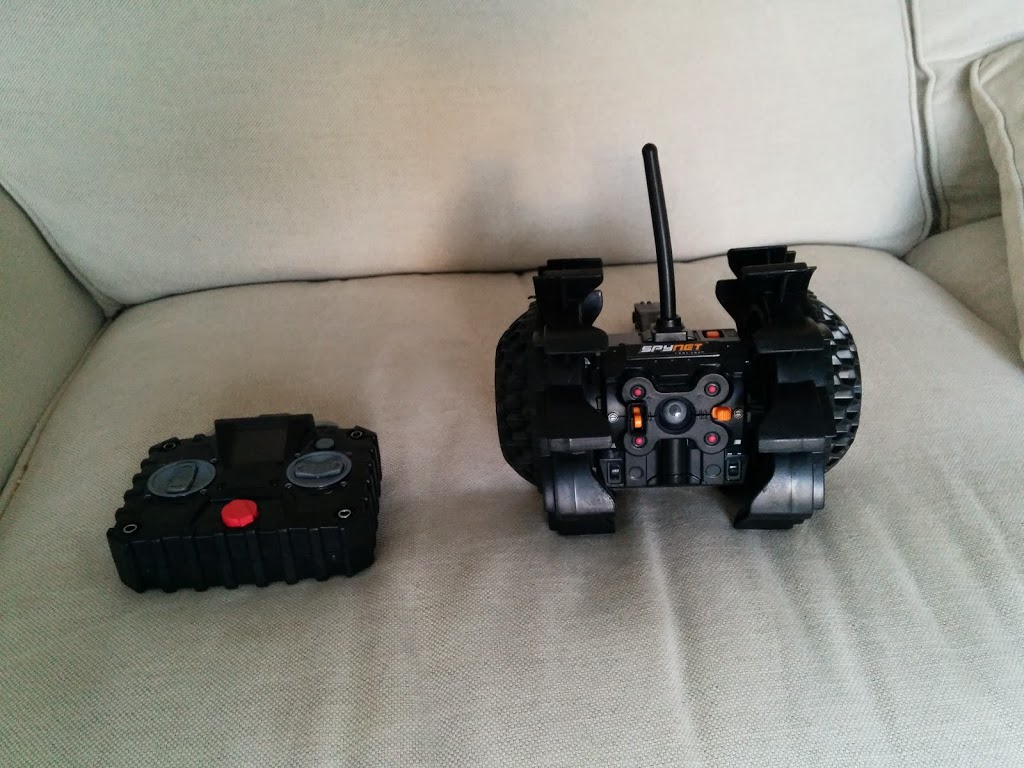 The remote has a large stamp sized LCD display on it that shows the camera display from the Throw Bot in colour at a pretty good range. We’ve sucessfully operated it at a couple of rooms distant. The remote isn’t analogue- there are effectly two buttons on rocker switches- one for back/forwards and the other left/right. The left/right is pretty sensitive, especially when it’s stationary, which makes precision steering quite tricky for little hands. The Throw Bot is built to a price, so unfortunately there isn’t the option to record the footage to external (or internal) storage. In terms of quality, it’s obviously not GoPro like, think more one of those 2 megapixel VTech Kidizoom cameras and you won’t be far off the mark. It works better in natural light but is remarkably good for what it is really.

So we have a combination of a pretty durable RC chunky, softwheeled vehicle with an onboard camera and a solid remote with a small screen to view the camera. It retails at £59.99 which is a competitive price for something that’s fairly unique in the realm of kids toys at the moment.